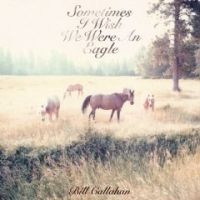 Bill Callahan - Sometimes I Wish We Were An Eagle

There is an odd aura to this record. In parts it feels like a Smog album, even sounds like one at times.»

bill callahan returns for his second lp under his real name (having previously gone under the pseudonym smog), following 2007's 'woke on a whaleheart'. like its predecessor, 'sometimes i wish we were an eagle' sees callahan a somewhat cleansed and lighter songwriter than on his notably dark and soul-searching early work, here utilising some extensive instrumental arrangements. french horns and strings grace several of the tracks, while callahan contemplates religion, nature and finding his own place in his trademark bass voice. on drag city.