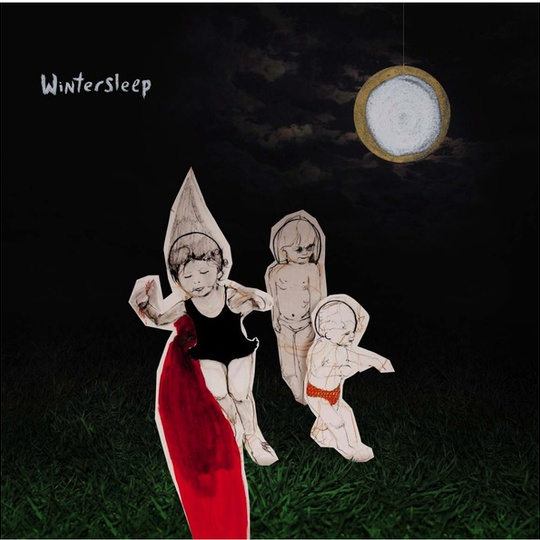 Within a few bars, it’s pretty clear Wintersleep should have a hit on their hands. The lead guitar part lags slightly behind drums & bass like a cavalry charge. The opposite of what the Pixies did, making them sound urgent, the instruments tripping over each other: this sounds like Wintersleep have some real heavy artillery, but they’ll keep it ’til they need to. When the melody resolves, you realize you’ve been holding your breath. The singer has the same tone as Paul Banks from Interpol – he doesn’t sound quite human. When backing vocalists come in, it’s never for more than two long notes – not swooping like Arcade Fire, but more like a faceless arena full of worshippers. There’s more where this came from, and with apocalyptic choruses like “UH-BLIV-EEEE-ON! UH-BLIV-EEEE-ON!” or more liltingly “the night / the night / the night…” This is big music.

Okay, now for some backstory. Wintersleep have already won awards and been tipped for great things, back in Canada; success in the US and UK isn’t going to be a struggle. Frontman Paul Murphy has had his own band as long as Thom Yorke had one before being signed, or Lennon & McCartney. This doesn’t make him a genius, but the five-piece band and Tony Doogan production does make you picture the world narrowed down to headlights on unlit roads, blurs of bare branches, pushing the needle way past what’s sane, and not caring if you flip on the next curve.

Here’s where we raise our collective eyebrow: Murphy claims heavyweight literary influences: “David Foster Wallace, Don De Lillo, Sylvia Plath, Ted Hughes.” With press-release in hand, this makes listening more than a little painful, less than three months after DFW’s suicide; sure, the opening triad are as immediate as any rock songs on any album you care to name, but there’s a real ache here. Could they have pulled this off otherwise, though? It turns out, what Murphy means is: a heartfelt, piano-led song about psychotherapy (‘Dead Letter and the Infinite Yes’), which wouldn’t be out of place on (my personal) Album-of-2007 Boxer, followed by a stomping folk ballad (complete with accordion-drones) about searching the whole world for your errant soul, or perhaps a good exorcist. In context, the “belly of a whale! belly of a whale!” chorus from lead-single ‘Archaeologists’ is a descent-into-the-depths / season-in-Hell motif that doesn’t just allude to Melville or The Book of Jonah, but a whole damn tradition in Western literature, right up to Mark Z. Danielewski. Again, though, does this enhance the album itself?

See, Murphy’s tremendously good at pushing buttons, just as Interpol occasionally dazzle with the mythic brilliance of lines like “I had seven faces / never knew which one to wear / I’m sick of spending these lonely nights / training myself not to care.” Two song-titles echo the best-known works of literary maximalist DF Wallace (Oblivion and Infinite Jest), and two more titles are shared with musical minimalists Low (‘Murderer’, and ‘Laser Beams’). In delivery and content, however, ‘Laser Beams’ and ‘Search Party’ are Coldplay songs – full of dramatic statements that sound portentous, but ultimately meaningless, and images that are incongruous rather than cleverly juxtaposed (“lightning bolts” – like Arcade Fire; “a paranoyyyyyyyd… boy” like Radiohead; and “a missing puzzle piece” like 2007 Radiohead cribbing 2006 Coldplay cribbing 2004 Radiohead). ‘Astronauts’ is note-for-note Editors (at their best), but clumsy in its dialogue between a preacher and an astronaut who’s actually looked down on the Earth. Then again, the album's lyrics are never quite as clunky as Interpol, and the album-closer is prime Explosions in the Sky, with the bonus that you can sing along to it.

Relatively small reservations aside - I want this to be great, rather than very very good - it's up there with the best in the field (Editors’ second album remains a guilty pleasure, with its Jackknife Lee production, and you’d never begrudge Interpol a dance, would you?) Whatever comes next, this is BIG MUSIC.