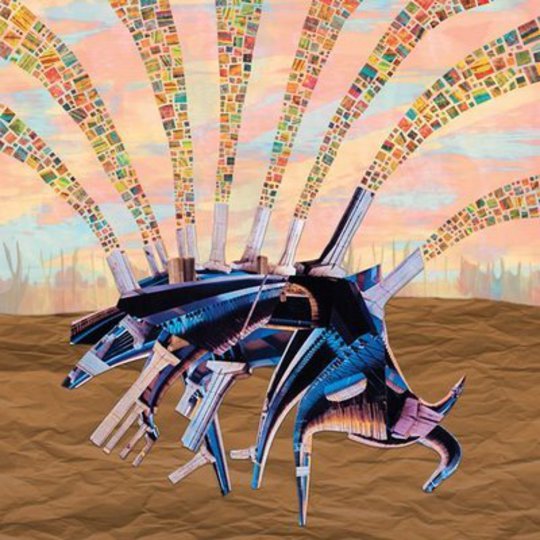 Parts & Labor are not really a band to mess around; Receivers is their third full-length release since 2006 and, since last year's acclaimed Mapmaker, two EPs – Escapers One and Escapers Two – have been released. It all hints towards the punk ethic that has underpinned Parts & Labor, but it's a definite move towards a sound experimented with in Mapmaker; a sound that is consolidated by the addition of Sarah Lipstate's electro-twiddles on guitar. It marks perhaps the final step in a departure from punk rock to art-rock via various noisy experimentations. In fact, listening to Mapmaker and Receivers back to back, the progression is obvious; though both records aren't too dissimilar, there's fewer and fewer hardcore elements present; listening to this you're much more likely to nod your head than bang it.

It's an album which is often euphoric, and this feeling is one which washes over you from the opening astral-electro exchanges on 'Satellites' and rarely relents until well after you've steadied your head from the delirious 44 minute sonic barrage of incessantly noisy power-pop which has been drummed into even the very deepest recesses and cavities. It's also a feeling best demonstrated very early on; as a climax is reached to wails of “wind up cloud in a wind up sky,” in 'Satellites', and repeated in 'Nowheres High' and, well, pretty much the rest of the record.

The nature of Receivers is even clear in the artwork, which portrays some kind of giant mechanical behemoth crawling across an industrial wasteland spewing out an octet of streams of blocks of colour into the sky. It's also an artwork which aptly conveys many of the concepts put forth lyrically and musically; those themes of a technological nature expressed in 'Satellites', 'Solemn Show World' and 'Wedding In A Wasteland'.

Throughout, Warshaw and Friel's vocals wash into the ever-present fuzzy ether; no single musical element takes prominence for too long, but each instrument plied together manages to create a final product which may lack clarity but certainly not clout. Each rumble, each droning guitar chord and thud of a kick-drum seeps steadily into every untouched orifice leaving a sound of unparalleled thickness and density. The drumming may sound like a mere afterthought, but it's the heartbeat to a musical body in harmony and fully functioning; this itself is a pretty stark departure from previous releases, where Christopher Weingarten's frenetic hardcore-punk stick and skinwork was quite often the first thing you'd notice, and was a key element which seemingly made everything double-time. The lack of such a pummelling jackhammer of a percussionist is noticeable, and has effectively meant what Parts & Labor have delivered is a much more measured – and in many ways restrained – record.

It is not just the the cacophony of chords and booming bass rumbles which make Receivers what it is though, there's the sizzling and bleeping which constantly bubbles under the surface; barely audible but all adding to the musical maelstrom whipped up, much coming from Friel's keys. Undoubtedly part of the reason for this is the band asking fans to submit their own recorded sounds, receiving hundreds of arbitrary noises, clashes, clangs and conversations in return. Every sound sent in has been included in some way or another, mostly making up the distortion of background bleeps and ambient chatter – if machines could gossip, they'd sound like this – in between songs.

This is a behemoth of a record and one in which the senses are battered; not by swift thwacks of sonic clusters but in where the weight of sound gradually and cumulatively begins to weigh heavily upon the ears. For all the electronic and guitar-led waves of sound, things can become overpowering and, if you aren't in a suitable state of mind, it all could become a little tiring. Without wishing to state the obvious, this is a different record to Mapmaker, and one which doesn't quite sit so highly alongside it. Turn this one need up loud to fully appreciate it – it's hardly bedtime listening – but you might want to have a little sit down and gather your thoughts after listening to it through for the first time and then listen to it again.

Does You Inspire You