Everything Beautiful Reminds Me Of You 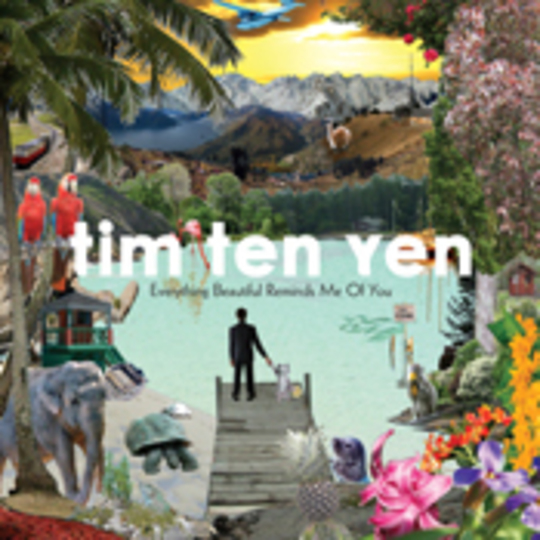 Tim Ten Yen is the “singing salaryman”. I have little or no idea what a “salaryman” actually is or does, but it's probably a description created because Mr Yen (Mr Ten Yen? (Can we just call you Tim?)) happens to dress like a bank clerk from the mid 1980s. Fair enough, but judging someone on such a gimmick, as I want to do, is not the best idea. Self-proclaimed 'Karaoke Pop' is as good a phrase as any to sum up a debut which has a considerable slew of indie-pop singalongs.

In theory Everything Beautiful Reminds Me Of You shouldn't be enjoyable; it should probably be a little repulsive. It has hallmarks of a guilty pleasure – and also of something which sounds, well, shit -- ; the tinkling of overbearing, tacky pan pipes, hand claps emanating from an instrument seemingly resembling a 'My First Casio Keyboard' and some half-spoken crooning. That said, dismissing Tim Ten Yen as an overly cheerful and terribly twee musical joke would be the easy thing to do and, even if there's some truth in those assertions, it'd be the wrong thing to do. For all the (intentionally) garish elements, they somehow give Tim Ten Yen that extra chunk of cheesy charm and things wouldn't be half as enjoyable if the bits which make you wince were removed.

Through every repeated listen the feeling of guilt lessens and it becomes hard not to appreciate the way each song is presented and layered; simply and subtly. After days of repeated listens, not belting out "I have an enemy, a sea anemone that won't stop blooming even if I tell it to" ('Sean Anemone') becomes an impossibility - unfortunately for anyone in earshot, the catchiest line of Yen's debut loudly and repeatedly leaves my lips. It's just one of a number of irresistible lines attached to hooks throughout.

From the opening synthesized squelches of 'Girl Number One' to the more straight laced finale of 'Your Love' it's patently obvious Tim Ten Yen is as much a man having a ball with this album as he is a man with a penchant for enormous pop-hooks. It's also clear he's someone who doesn't take himself too seriously, and neither should he be taken too seriously as the effect would be lost somewhere between irony and melody.

The disposition is consistently chirpy, the Neil Hannon-esque vocals quirky and the accompaniment unashamedly and overbearingly cheap, but Tim Ten Yen is a man unafraid, and well aware, of the above; it's part of the appeal. The filler might also be forgettable and the longevity limited, but Everything Beautiful Reminds Me Of You ain't half a lot of fun.