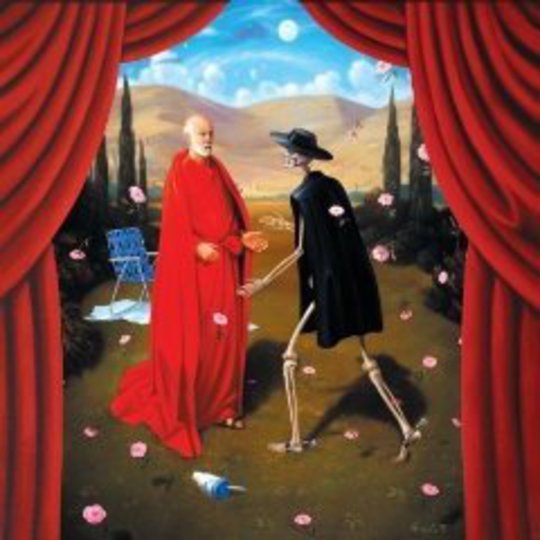 Vic Chesnutt is somewhat of a dark horse. One of those that races like beer bubbles beneath the radar. The Southern-fried songwriter has released competent material for over a decade, despite few people noticing. Last year, Chesnutt released a beast of an album with post-rock legends A Silver Mt. Zion titled North Star Deserter and no one noticed; same goes with his influences on scores of artists, including Michael Stipe. But throughout his career, a few simple syllogisms have carried through each album, regardless of its context. Despair is one, usually coerced by drugs or alcohol of some sort, and another is political disenchantment. But few are better than Chesnutt at coiling stories together from these black muses, and Dark Developments is no different. Yes, we have fellow Athens, Georgia/Elephant Six members Elf Power and sometimes accompanying band The Amorphous Strums contributing here, but start-to-finish this is a Vic Chesnutt sonic dystopia. And if you’re familiar with the man at the helm, this collaboration will excite. If this Georgian songwriter is foreign territory, best not start with Dark Developments (suggestions where to start are welcomed in the comments below).

Each of these nine songs is rough on the bones, as if Chesnutt is scraping each verse with a pallet knife before expression. Take ‘Little Fucker’, a five-minute romp that screams through gnarled teeth and pounding, rhythmic distortion. It’s acme challenges Lou Reed or Nick Cave in morbidity, taking blood-soaked country lines to pasture in each simple, damning acoustic strum. Moreover, ‘We Are Mean’ is just that, a death-folk affair that proves its claim in each note, through powerfully dark vocals and well-timed, melodic refrains. At times it’s so quiet it arises suspicion, while other moments notes are left to die slowly, as if the organ wail is bleeding out throughout the song.

And Chesnutt never lets up. The off-key trumpet throngs that split up the incessant Lou Reed-esque shouting on ‘The Bilocating Dog’ enthuse as much as incense. Little is in tune, let alone does it desire to be. That’s besides the point in something so dreary-eyed it’s often blinding. With Chesnutt, as always, every note screams bloody murder. And as such, it’s better off because of it. And still, to this point, I have yet to discover what ‘bilocating’ means (here's what wikipedia suggests - _Ed_). I’m guessing something bleak.

Yet, despite its darkness, Dark Developments is far from inaccessible. Chesnutt’s vocals never intimidate, and Elf Power’s accompaniments and choral tongues are tasteful, careful not to overpower the vocals while innately aware how important the supporting cast is in shaping the overall mood. But it does shape a similarity with every other Vic Chesnutt album, in that it is eccentric enough to be ignored, just a tad too dark to ever see sparks of light.

Everything Beautiful Reminds Me Of You