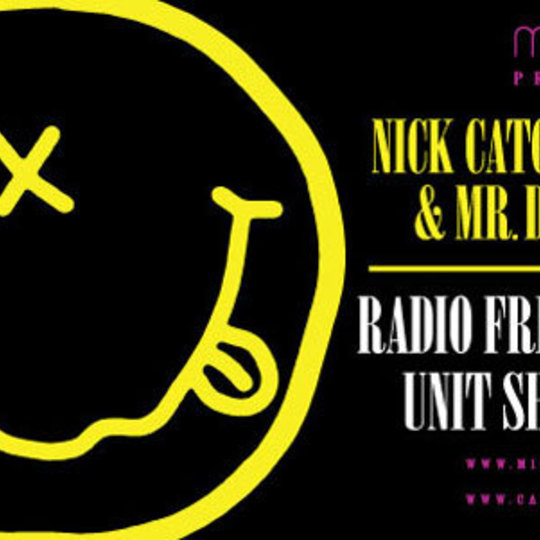 Mention the 1990s to pretty much anyone and the sole image that'll come into their head is Ruel Fox. And while Montserrat's finest son undoubtedly ran that decade, Nick Catchdubs & Mr Ducker aren't too happy with what's being overlooked in this state of affairs. So they've put together a compilation shouting out that most repressed/mocked/"Do you seriously want to sit through Empire Records again?" of genres, Alternative Rock.

Actually, it's not a compilation really - that's a little too 1990s. It's an online mixtape (as in what hip-hop runs on, not what you put together to fuck Swedish indie chicks). It's compiled by guys from the world of hip-hop rather than guitar rock (you can still catch your reflection in Catchdubs' toecaps from the amount of shine he got for Wale's Mixtape About Nothing, and as such all your flannelled faves are mixed together, mainly cut down to a verse and a chorus (which is really all you need to hear from The Folk Implosion), and the whole thing is garnished with scratches and samples, which is an especially nice touch when the Beavis and Butthead-approved 'Detachable Penis' by King Missle now has the "dick dick dick dick" bit from Reservoir Dogs over the top of it, or the intro to 'Bulls On Parade' featuring Michael Douglas trying, in vain, to order something from the breakfast menu.

All your faves are on here: Weezer's mainstream-alienating celebration of Extreme Championship Wrestling and race fetishisation 'El Scorcho'; 'Pepper' by the Butthole Surfers, which still stands as the only true grunge Mondeo Pop track; 'Doin' Time' by the utterly shit Sublime; and, for women, Pavement.

Although it works as something that is legitimately enjoyable to listen to, it's a mixtape that raises a lot of questions. 'Backwater' comes in about a third of the way through this, and it makes the point stunningly clear that The Meat Puppets were a wasted opportunity. If they'd have sung about some sensible shit and not been called, y'know, The Meat Puppets, they could have made some serious moves on the AOR circuit: radio-friendly anthem rock that your mother could do the washing up to. Heck, if they'd have done that and stuck around until now they could be on the Grey's Anatomy OST, serving as Very Special Guests on The Fray's latest tour. But no, I'm sure they're happy being known as "that band Kurt Cobain liked who weren't those fucking Japanese bitches".

Speaking of which, Cibo Matto are on here as well, and time hasn't withered the irritation that 'Know Your Chicken' visits upon your earholes. And to think in the UK that we used to complain about Bis. Completing the trinity of dreadfulness is Rancid's 'Roots Radical', a song you can actually feel your hair congealing into shitty whiteboy dreads as it plays.

And if you want to talk about omissions, there's only one UK track on here (Supergrass' 'Caught By The Fuzz'), surely disappointing those waiting for the Silver Sun revival, and there's a marked absence of 'The Distance', 'Underground', and 'Popular'.

But there really is no need to focus on the negative. There's legit 10/10 bangers like L7's 'Pretend We're Dead', The Breeders' 'Cannonball', Harvey Danger's 'Flagpole Sitta', and The Offspring's 'Come Out And Play' (really should have been 'Self Esteem', but what can you do?). There's even a "connect-the-dots" rap interlude with Woodstock 94-friendly tracks from A Tribe Called Quest, Cypress Hill, and House of Pain. And how many other albums dropping in the '08 sample Stimpson J. Cat bigging up "my favourite song of all time"? Answer: not enough.

At the end of it all, Radio Friendly Unit Shifter is Girl Talk for people who aren't insufferable cunts. And it's free. And it'll give you a whole new bunch of opportunities to shout "amputee goddamn you" all over again. There really isn't an excuse for not downloading this.