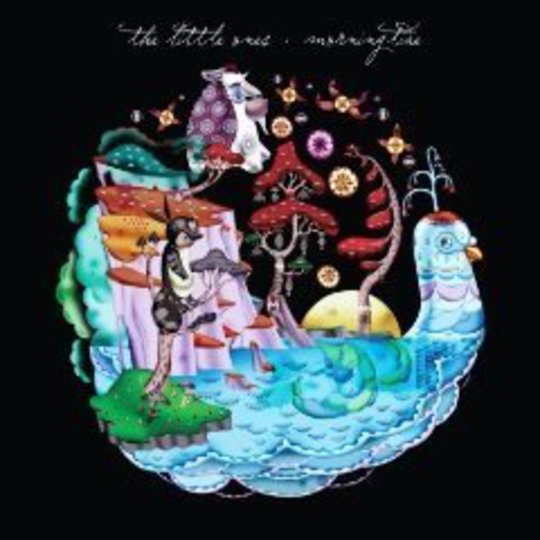 "The Little Ones quickly realized that their only weapon against reality was their imagination. They embarked on a radical experiment: to see if they could convince themselves that everything was going to be all right. They spent majority of their nights holed up in their studio affectionately named Uncle Lee’s’. There were many songs written and many songs abandoned. At times, they felt their muse had left the building. Still afraid of the world outside, they adopted a ‘just write and don’t tell anyone policy’‚ that lasted for more than a year. As the experiment grew longer and longer, they grew weary that they could no longer follow the path they started on. One by one, each of the Little Ones wanted to stray. A new barometer needed to be set. They came up with Uncle Lee’s ‘Rule of Feet’. The rule stated that a song was deemed appropriate if, and only if, each of the Little Ones’ feet could shuffle. Once they adopted this new rule they began to realize what they had right in front of them." (littleones.com/about)

What can we learn from this? I’ll tell you what: that The Little Ones lack any earthly, tangible grounding in reality whatsoever.

That’s not to say matter-of-factly that escapism is such a bad thing. Children’s telly for one can be as far-fetched as anything our sensors take in. However, its purpose is to open young minds and inject grey matter with absorbent qualities and the ability to interpret and imagine. The wild images and dizzying storylines prepare infants for problem solving and imaginative thought processes in later life, when they have been compromised by the harshness of the real world. Unfortunately, The Little Ones remain nappy wearers in adult bodies.

Yes, there are artists out there who write so positively and impersonally commercially that the product is a readily synthetic high that the mob freely latch onto and become a fan without a second thought, but this isn’t the best music.

The best music has a hidden dark edge that might seem so shrouded that it simply washes over its listener, but it’s still there and demands consideration. For example, The Little Ones-inspirers The Beach Boys wrote party music, but their tunes had undertones highlighting internal band conflicts, mental illness and drug abuse.

The Little Ones however have produced a record that naively ignores all the elements that make reality real, and therefore it doesn’t make much sense. It’s happy and lively to the point of vulgarity. The Guardian reviewed the album as being The Magic Numbers sung by a bunch of US indie kids. Sick, right?

The messages have no messages. The songs fail to cut it with any substance. Every one is laced with a smile so fake and ignorant you want to punch it until it bleeds something real.

The only saving grace of the LP is the seventh track. ‘Everybody’s Up To Something’ is an ode to paranoia with the haunting lyric, “In the light we’re better”_. It’s classic ‘Stay in your homes, duck and cover’ advice from Americans who have a history of being afraid of their own people as well as foreigners.

There are other glimmers of hope in a profoundly Coldplay-esque morbid choir blasting in ‘Tangerine Visions’, and the group jumps between drum sequences and melodies in ‘Gregory’s Chest’, making for a very interesting listen.

However, this isn’t enough to save an album so green it wouldn’t be able to tell you who Robert Mugabe is, or of the dangers of conspicuous consumption. Until The Little Ones comes to grips with a truth outside walking down a beach with a pretty girl they cannot expect to be taken seriously.

After all, even children eventually laugh at what they used to preoccupy themselves with before switching over to Channel Four News. Or is that The Simpsons?