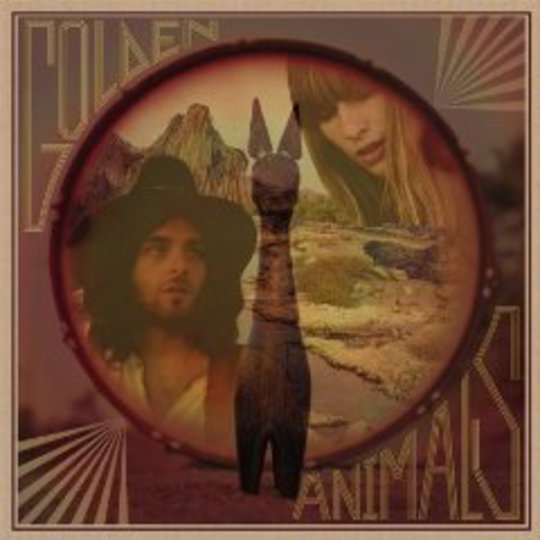 The debut album from American/Swedish two-piece Golden Animals is a record firmly rooted in the blues - not just in terms of the musical genre, but also in the despondency which saw Tommy Eisner (vocals, guitars) and Linda Beecroft (drums) up sticks from Brooklyn for the near-total isolation of the California desert. It’s there that Free Your Mind… was written and recorded, an album whose title and content represent well the twosome’s eschewal of the contamination of modern living in favour of the purer sensibilities of times past.

Yet that’s not to say this is a complacent record. Indeed, early on Eisner and Beecroft take great pains to transcend the limitations of their rudimentary set-up. Album highlight ‘Queen Mary (The Flop)’ features multiple tempo changes and builds to an electrifying frenzy which must go down a storm in a live setting. Similarly, ‘Ride Easy’ begins as a tender country plodder, but undertakes several detours in its three and a half minutes, with satisfying results. The band also manage, by and large, to avoid trespassing on ground covered by other similar contemporary outfits - although some will find ‘My My My’ a little too close to The White Stripes for comfort, and their take on the traditional ‘Turn You Round (Don’t Let Nobody)’ does carry more than a whiff of Two Gallants.

Elsewhere, there’s a distinct (and somewhat unexpected) girl-group influence to ‘Follow Me Down’, and even the more straightforward numbers, such as the 12-bar blues of ‘My Friend Bill’, are not without their charm. But while this is all very well and good, the album ultimately suffers from a dearth of truly essential material. It’s a mature, accomplished and surprisingly diverse collection of songs, but life-changing it ain’t.