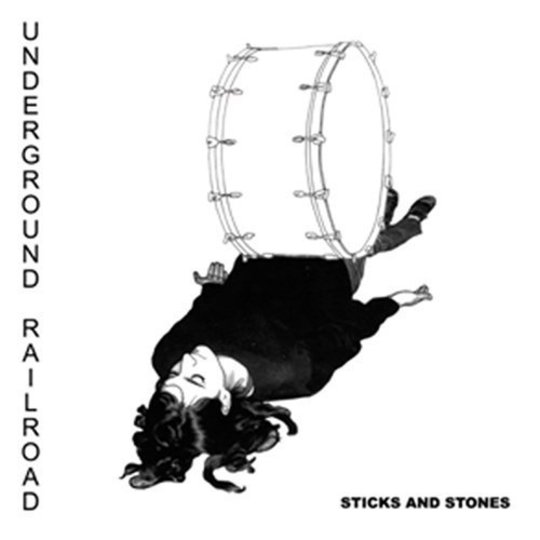 What is it that makes French musicians so damn cool? Serge Gainsbourg was a drunk pervert who never found his musical niche, yet still managed to snag English Blow-Up beau Jane Birkin and earn himself the title of the '20th century Baudelaire'. Justice are one of the hottest names on the electro house scene. Sébastien Tellier has somehow retained his street cred despite being France’s Eurovision entry, despite arriving on stage in a fucking golf buggy.

A Paris spawned, Velvets and Jesus & Mary Chain-obsessed boy/girl post punk outfit will therefore have music hacks, Hoxton scenesters and pseudo Bohemians alike foaming at the mouth. Underground Railroad are just that. Following on from 2005’s debut effort Twisted Tress, it’s clear that with Sticks and Stones Underground Railroad have not abandoned the angularity that was fast becoming their trademark along with their riotous shows - drummer/singer Raphael Mura suffers from ADD, something that always makes for a riveting live performance. However, it is safe to say that there is a new found maturity to their sound, opener 'Poems For Freaks' is a slow burner; dark Pixies bass rumble meets the more mellow moments of BRMC.

The title track and recent single finds the trio in more familiar territory, the brooding verse building up to a chorus crescendo which finds Mura shrieking that “sticks and stones may break your bones.” '25' verges on epic, a heavily disguised guitar line reminiscent of Yeah Yeah Yeahs' Nick Zinner and a positively poppy tag line that sounds a bit like the Vines?! It works and it’s one of the album’s highlights.

The tail-end of the album is a bit scraggy. 'Six Pieds Sous Terre' is a simple, breezy pop song, in fact it could quite easily be a Rogers Sisters cover, 'New Variety' is the Underground Railroad that I first witnessed live, primal Sonic Youth intensity and alternating chanted vocals, not much of a tune but still massively alluring. 'Idealize' starts promisingly, simple and understated - it’s not a million miles away from 100 Broken Windows-era Idlewild, however soon this fizzles out for the album finale and it all goes a bit Brand New.

Ignore the fact they’re French - this record would still be great and they’d still be cool as hell anyway. Sticks and Stones is a huge progression for Underground Railroad. Sleeve's still carry influences but there are proper songs on this album, with a melody and chorus and middle eight and everything.