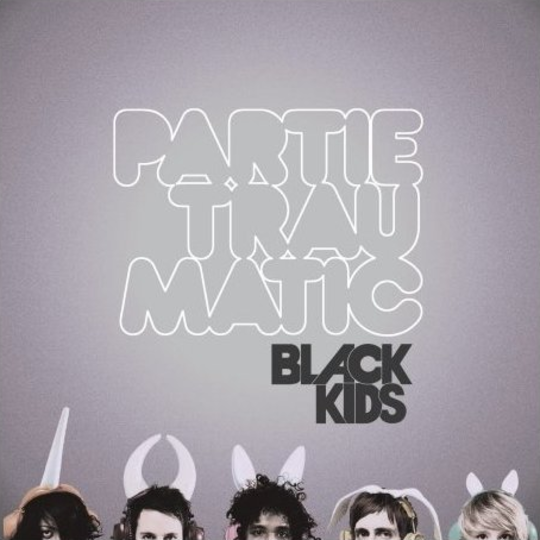 Black Kids are exactly the type of band old and slow critics like myself feel so very envious of: youth firmly on their side, demonstrated in that name no less, the Florida five-piece are presently riding a wave of hype about the world, visiting places on this planet that they’d never have otherwise reached without the gusts of turn-of-year tipster wind. Lead single proper ‘I’m Not Gonna Teach Your Boyfriend How To Dance With You’, released in April, was a breathlessly brilliant, completely catchy offering that seemed to indicate the talk was to be justified, and soon. _Partie Traumatic _was just over the horizon, but a few weeks away. Time to get excited.

Until all of 20 seconds into this debut, that is. An all-fireworks-and-sparklers opening flurry is followed by vocalist Reggie Youngblood mumbling the words, “Knock, knock”, before twin keyboardists Ali Youngblood (yes, his sister) and Dawn Watley respond with “Who’s there?” Is there a punchline? Nope, just something truly bizarre about a ghost in somebody’s underwear. Keys fizz and sizzle, and drummer Kevin Snow keeps things moving, but ‘Hit The Heartbrakes’ is a disappointing opener that doesn’t exactly raise hopes for the remainder of this record.

The album’s title track serves up echoes of Pretty Girls Make Graves, late period, muddled with terrace-delivery vocals a la Kaiser Chiefs – structured rhyme schemes working overtime to balance enough variety beside repetitions of “it’s party traumatic”. At one point Youngblood, R seems to channel Bowie, but it’s hardly the Thin White Duke’s purple patch he’s referencing as he shouts “it’s magic, dance magic!”_ What, like this? ‘I’m Making Eyes At You’ best wears the band’s obvious Cure influences on its sleeve, seemingly mixing ‘Close To Me’ with ‘In Between Days’.

Children’s cartoon squelches and synth effects straight out of a scary Knightmare situation give ‘Listen To Your Body Tonight’ a little life beyond the typical formula of Youngblood exchanging lyrical blows with his back-up sister, but the song’s one of many here that lacks the spark so essential in debut albums nowadays – that certain something that transforms a good record into a great one, full not of promise for the future but perfectly executed excellence in the here and now. The album’s two singles – the aforementioned ‘I’m Not Gonna Teach…’ and ‘Hurricane Jane’ – were recorded before the rest of this album, and there’s a noticeable difference: the standalones shimmer with a brilliance not so evident elsewhere. Much of what’s left feels flat, entirely singular of dimension whatever the subject matter (which is usually broken hearts); producer Bernard Butler’s known for lending a widescreen edge to his records, but Partie Traumatic doesn’t quite extend beyond a decently proportioned flatscreen plasma.

‘Love Me Already’ wheels out the now-whiffy punk-funk motifs that made The Rapture’s name back when, but by this late stage of the album your average Partie Traumatic listener will have stopped paying all that much attention, the desperate cries of “Love, love, love me already, baby…” sadly consigned to falling upon deafened ears. Too flat, too lifeless despite the perkiness of its preceding singles, this debut – while not a technically poor album, boasting as it does pop hooks aplenty if you truly focus in, beyond the sometimes irritating vocal tennis – sags where it should soar, dips where it should peak. It’s too tidy of design for songs that’d sound better engaged in a fistfight or two, a dusty roughing up out back.

Initial envy turns slightly to faint sympathy come the weirdly Chromeo-recalling penultimate cut ‘I Wanna Be Your Limousine’ and the forgettable bluster of closer ‘Look At Me (When I Rock Wichoo)’. Black Kids have got it all right now, everything they could have wished for when they formed two years ago, but unless future singles are carefully selected, and maybe even remixed to amplify their more appealing nuances, their career trajectory could well veer worryingly in the wrong direction before long.