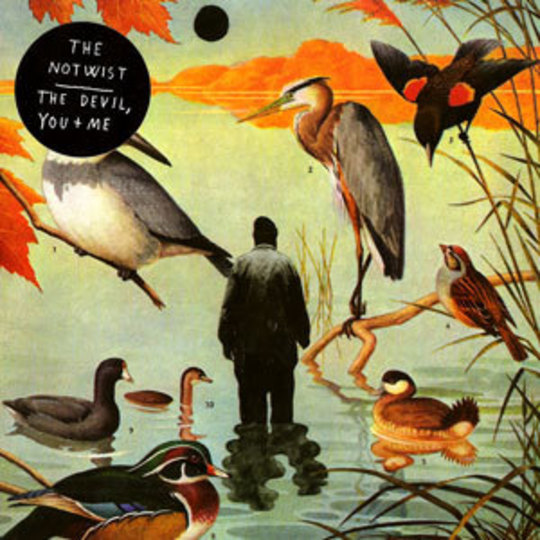 The Notwist’s absence from record-releasing ways – six years, since 2002 – wasn’t noticed by all that many in the music industry if a bigger picture is focused on, but the Germans’ return is cause for celebration regardless: charts will remain unconquered, the mainstream more than a fluke hit out of touch, but The Devil, You + Me is an album, some two years in the making, that’s worth the wait.

The quartet’s last, Neon Golden, fared incredibly well reception wise, The Other music website of note awarding it a phenomenal 9.2; it’s a classic of its kind, a post-millennium masterpiece. This follow-up isn’t quite on that level – it’s a quietly absorbing affair that may take real time to reveal its true place among 2008’s many releases of comparable quality – but in its nuances lie treasures, facets reflecting ambition realised and involved individuals instilling the album with an understated grace that renders it peculiarly listless first time around, sonically interesting second and really quite intoxicating if you rightfully give it a third. With more, it gets better still. Soft edges sharpen, dull forms focus.

Now into their third decade as a band – their self-titled debut, released two years after their formation, emerged the same year as Nevermind and Out Of Time – The Notwist have evolved into a group whose incorporation of electronic elements into familiar-enough indie-pop arrangements never feels forced, shoehorned for style-over-substance showboating effect. This is best heard on this LP’s lead single, ‘Where In This World’ a former Single of the Week. Vocalist Markus Acher – one of two brothers in the quartet – has also become more comfortable in his role; earlier albums found his contributions occasionally jarring with the more mechanical movements on offer, but here a certain symbiotic balance is established, better perhaps than that presented on Neon Golden.

‘Alphabet’ finds Acher sighing through a digitised gloom, greys and greens colliding in a storm that crackles above a metronomic backbeat. “I won’t sing your algebra,” he states, as around him math-rock machines splutter themselves sore, finally fading from red lights to blackened silence. But this isn’t an album detached from the human heart of its audience, as the title track makes clear: here, The Notwist mirror the tenderness of Efterklang at their affecting best, a gentle strum and crisp vocal enveloping the senses swifter than any of their more manic arrangements. It’s the fulcrum upon which The Devil, You + Me rests, an essential support stripped of complex embellishments and all the more beautiful for it. ‘Hands On Us’, too, is delightfully sombre, an offering demanding repeat plays.

Familiarity does seep into the experience – ‘Gravity’ is the album’s single without its drama, and ‘On Planet Off’ is perhaps a little too soaked in circuit board static for its core emotions to rise to the surface – but never does The Devil, You + Me become less than a pleasurable listen. It _is_ a slow-release record, one that all but the most hardcore fan of the band will need to spend some serious quality time with to get the best out of – I won’t hesitate to add I’ve not had it quite long enough to unlock its secrets – but there’s no doubting it’s a very good album. The band’s best? Probably not. A successful return from a hiatus overlong? Certainly.

Not For Want Of Trying