Stories From The Watercooler 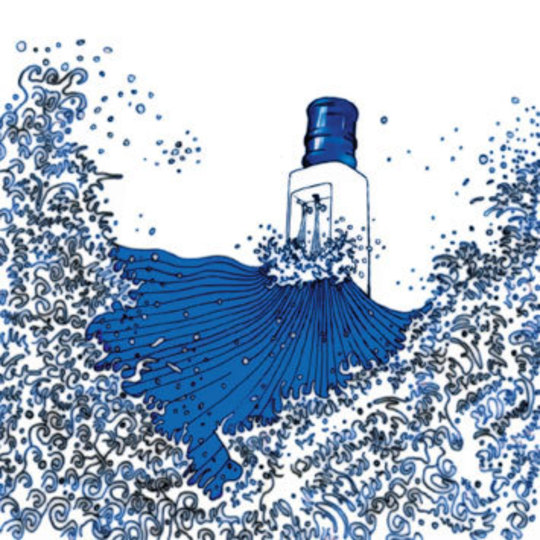 It would be easy to judge John Matthias** by association. Since venturing out with po-faced Radiohead vanguard Thom Yorke in an Exeter university-days band, the prodigious multi-instrumentalist has gone on to work with Coldcut, Lunatic Calm, The Blue Aeroplanes and the ridiculously talented Matthew Herbert, not to mention scoring a guest appearance on his former cohort’s seminal album The Bends. Yet Matthias displays few of his much admired collaborators traits; he is neither pioneering forbearer of electronica nor is he abrasive, nonconforming rock delegate.

What Matthias is: a teller of stories, an idealist who uses the real world as the source of inspiration for sonic creationism. But his is not the dreary minutiae of lads-getting-lairy-on-a-Saturday-night shite Arctic Monkeys and those subsequently spawned dangleberry bands churn out as rank-rotten high street store fodder. No, his craftings reflect upon the misgivings of society through a tapestry of articulate narratives woven skillfully between evocative swathes of intricate melody.

Such a prelude may imply Matthias’ latest long-player Stories From The Watercooler is cut from the same politicised cloth as offerings by the likes of Bragg or Dylan, yet Matthias has no high-horse to straddle, no soap-box to stand – he just calls it as he sees it, plain and simple. Yes, this is a record embedded in the traditions of folk, both lyrically and musically, but rather than sticking to the genre’s organic roots it garners a more urbanised vision, using sprawls of transient, city-slicking synths as a backbone to Matthias’ brittle upfront acoustics. And, more often than not, it works.

It's the structural simplicity of …From The Watercooler _that strikes listening ears first. Produced by Coldcut’s Matt Black and Jonathan More, the vast majority of tracks ease in with sparsely strummed lilts that escalate as a climax of floating keys and bulbous bass. Early numbers _‘Open’ and the media baiting ‘Vipers Nest’ pertain rigidly to this thoughtfully constructed pathway, using Matthias’ nasal tone – reminiscent of Alfie’s Lee Gorton in its sleight-handed reticence – to entice and seduce before filtering through a series of septic-tank synths that thicken each threadbare cut with a sinister, eerie edge that’s both enthralling of sound and riveting of dialogue.

Continued throughout, this architectural approach to song structure is a beatific pillar upon which the lucid creeping of ‘Evermore’ and ‘Stocktaking’’s plaintive, slowburning strums rest. But when relinquished from his self-tailored shackles Matthias appears short on options, leaving the insipid ‘Blind Leading The Blind’ to thrust limply like Gary Numan after a midnight rendezvous with The Mighty Boosh, while the squalid gutter-rock of ‘Spinnaker’ masquerades as a decrepit Wolfman cast off, minus only the skaggy-eyed hangers on.

Thankfully, the record’s lyrical dexterity more than compensates for this brace of incredulous dirge, with Matthias excavating a glutton of cultural crevices - from a civilian’s take on illegal invasions (‘One Sunny Morning In The No Fly Zone’) to the displacement of new money luvvies in London (‘King Of A Small Town’) – through his sharp-slicing trowel of a tongue. And from these rich visualisations comes ...From The Watercooler's pulse-stopping pivot, the astonishing ‘Stockwell Rd’. A world-weary canticle blessed with tender ivory keys and sympathetic strings, the brittle-boned track has Matthias mulling over the death of Jean Charles de Menezes as he re-walks the Brazilian’s final steps each morning.

It’s a truly remarkable moment of attention-standing poignancy and one that defines a record bulging with intrigue and promise. The execution may not be triggered with the quite the same poise of his many ex-conspirators but with Stories From The Watercooler John Matthias proves, beyond all reasonable doubt, that he’ll never be found guilty by association.

Crystal Castles, Hadouken!, Does It Offend You Yeah? at Liverpool Carling Academy, Tue 27 May