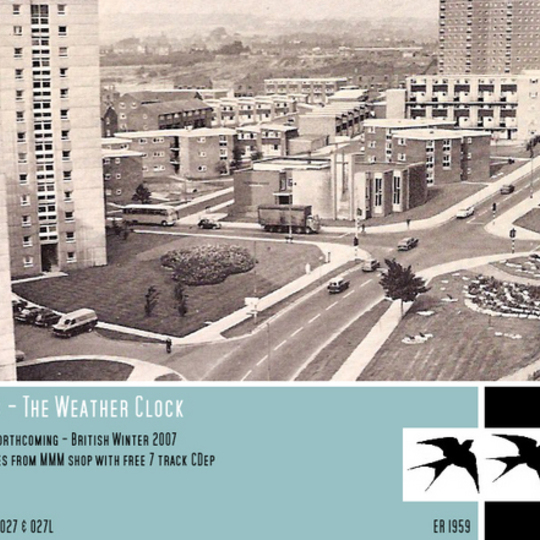 "The Weather Clock is inspired by a lost post-war Mid-20thC Britain and a fixation with the design and architecture of the period."

Huh? Not your average press release blurb, but then the music of July Skies (real name Antony Harding - but not the Hefner drummer) isn't your average listen. From a cursory glance at the packaging, with its accompanying booklet of sepia-coloured photography depicting scenes of the like described above, it's clear Harding is presenting a concept as much as he is a collection of songs.

That concept, then, is of some lost, bygone age. An entirely British slice of nostalgia: the wireless, static, dew, leaves, playing fields, paving stones, hopscotch, afternoon tea... that sort of thing. And if all that sounds as exciting to you as it does to me, well, you're probably going to be left cold by Harding's ‘compositions’ (as he rather boldly proclaims them on the back sleeve).

It's not that The Weather Clock is poorly executed - far from it. Sigur Rós are an obvious, dreamy touchstone, but in his attempts to weave the aforementioned vision into the songs they somehow become dull and lifeless along the way. There's nothing to grab the attention here, or make you want to match the grandiose titles ('Distant Showers Sweep Across Norfolk Schools', 'Branch Line Summers Fade') with their respective songs. It's all a bit too po-faced for its own good. 'Girl On The Hill', one of only two tracks featuring vocals, piles up layers of reverb-drenched guitars to better, more interesting effect but even then it barely gets the pulse moving.

Of course, fans of the record would argue that's hardly the point. Impeccably rendered ambient shoegaze they'd probably call it, and that's fine, but when it's so ambient and so shoegazey that your head makes a beeline for the floor and you find yourself in some deep, cotton-wool slumber barely halfway through... well, exactly... Zzzzzzz.