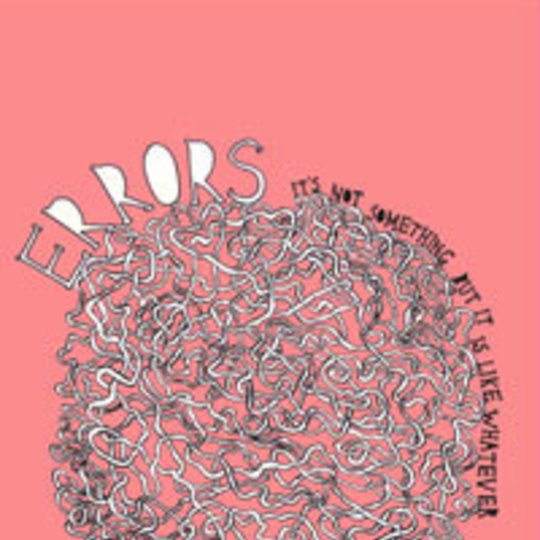 Errors’ debut has taken its sweet time, its makers four never ones to hurry what can’t be achieved over a period of time more preferably suited to non-professional musicians whose keyboard stabs and drum rolls aren’t entirely paying those bills. But, patience is largely rewarded: It’s Not Something But It Is Like Whatever, awkward title aside, is a stellar if belated successor to the Glaswegians’ recommended How Clean Is Your Acid House EP (review).

Cited as north-of-the-border sound-alikes of Battles by some areas of the music press, Errors’ signature bleeps and moans, coupled as they are with traditional/organic percussion and guitar arrangements, do equal a faint echo of their cross-Atlantic peers; but to paint them as copyists of any kind is to fail to fully appraise the subtleties and nuances that so cleverly infect the listener throughout this ten-tracker. The simplest passage can initially appear an afterthought in the grander scheme, in a plan where intricacies dance merrily beneath solid squelches and crisply crunchy beats. But it’s these buzzing motifs that remain in circulation about the grey matter as early as the final fade of closer ‘A Lot Of The Things You Don’t Isn’t’; incidentally, the album’s parting offering is something of an understated departure, carried on graceful piano lines.

Unusually for a debut LP, little previously released material makes the transition from short-play status to full-length status, with only the single ‘Salut! France’ appearing; its seven-inch flip, ‘Maeve Binchy’, might still be available on greenish-yellow wax, somewhere. The sole blast from the proverbial doesn’t feel at all out of place on this collection, but it does seem fairly singular of dimension compared to tracks like ‘Still Game’ and the band’s latest single, ‘Toes’; both feature facets further and deeper than anticipated, attracting attentions with familiar snippets of wobbly-timed guitar patterns before sucking souls closer still to the songs’ cores with tickled hi-hats and weird, droning FX that are a million miles away from standard, or ‘demo function’ if you must, synth embellishments.

Errors haven’t forgotten to pack instant-fix cuts alongside their more introspective offerings, of course: ‘Pump’ fizzes and pops like a dirtied-up LCD Soundsystem shorn of those so-so vocals. Speaking of vocals, only one track here, ‘Cutlery Drawer’ features any, and they’re delivered by George Pringle. An artist of true opinion-dividing DiS infamy, at least on this site’s messageboards, Pringle’s contribution here lends Errors an affecting edge they’ve never explored before now, her spoken-word lines not necessarily of interest to everyone topic-wise (DVDs, drugs, Oxford, stuff) but sliced and glitched by the band to the extent where the track might just be the best thing she’s been involved in to date. The two artists are certainly encouraged to recreate the magic they’ve mustered on record in a live environment.

While a few tracks can be categorised as forgettable – don’t mistake that term for the rather more offensive, and false, ‘filler’ – so much shines throughout It’s Not Something… that it’s truly tough to quit listening to it on rotation after that first time through, after the first impressions have laid foundations. This is a debut with legs – some will hear it, dismiss it, and then return six months later and realise what didn’t make sense then totally connects now. It’s of that mould, a quite singular product of four men, and a guest lady, left to their own devices and never too pressured by their label to come up with the goods. This attitude, considered slack no doubt by more figures-driven industry types, has paid dividends.

Now, how long before the sequel?