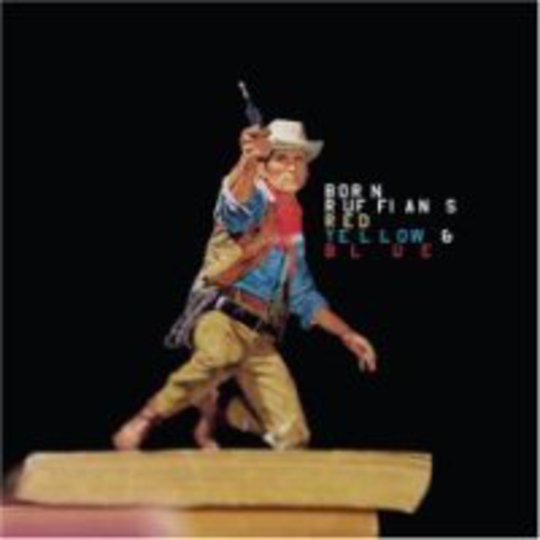 Perhaps not all is lost in this murky world of music as product and sound as commerce when it’s left to a band as distinctly off-track as Born Ruffians to sell mobile phones and soundtrack hip teenage television phones.

Indeed, given that Red, Yellow and Blue_ is directly influenced by the likes of Animal Collective (so much so that Animal man Rusty Santos produced this disc), David Byrne, Violent Femmes et al, you could see it as some sort of victory for the indie underclass. Shame, then, that it’s merely a pyrrhic one. For while Red, Yellow and Blue_ is a spirited one, it fails to reach or rise above the watermarks set by its like-minded cousins.

Inarguably, there’s something in the water at the moment when a class of '08 can throw up the likes of Vampire Weekend, British Sea Power and Yeasayer together where all are at a stage where they strive for the common goal of melody in unconstrained musical terms – a healthy antidote to all those faceless bloke bands who fill up the large theatres of this country. Unfortunately for Born Ruffians though, it means that competition is strong for the crown of best odd-pop band to grace your independently-minded music publication. Throw in a rejuvenated Futureheads, and the competition is practically barbaric.

Inevitably, it’s 'Hummingbird' that shines through; the track chosen to represent Orange mobile phones is both vital and brilliant, guaranteeing filled sticky dancefloors across the summer, and midly ironic, given that their forebears The Violent Femmes are now their great telecommunication rivals with their own ‘Blister In The Sun’ being used to shift handsets. Unfortunately, while there are other good songs on _Red, Yellow and Blue, none get particularly close to meeting their three minutes of magnificence. ‘I Need A Life’ is the nearest, melding a rustic ramshackleness with a great call-and-response chorus, but lacks a similar brain-niggling stickability. Elsewhere, ‘Badonkadonkey’ can lay claim to a fantastically onomatopoeic title and an enjoyably nonsensical delivery, while ‘Foxes Mate For Life’ employs an agreeably bucolic shimmer but ultimately fails to offer any great substance. Tracks like the eponymously entitled opener which nods strongly towards Panda Bear et al and the reflective ‘Hedonistic Me’ point towards grand and inventive ideas, but never quite hit the required mark.

It’s a frustrated listen, thanks to unrealised ideas and a potential that you sense has yet to fully unlocked, but there are enough good songs and great moments studded amongst the mire to make Red, Yellow and Blue both a worthwhile purchase to cherry-pick the best from as well as an indicator of good things to come from the Canadian trio.

The Futureheads at Camden Electric Ballroom, Camden, Thu 29 May