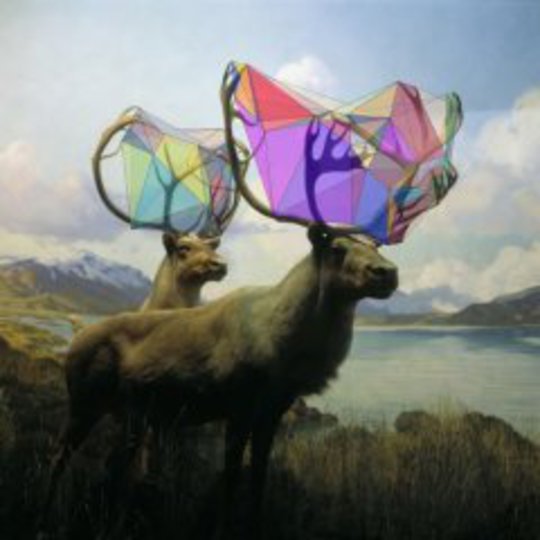 When was the last time you really heard something totally weird, totally new, something that truly halted you in your tracks and pricked your senses like nothing you’d heard before? It’d be lovely to say, hand on heart, that such incidents were regular occurrences, but you and I know that’s not the case. So offer praise, please, for a band who’ve made me stop what I’m doing and turn them up, sink into an easy chair with a mug of tea and just let them do what they will. I’m willing, let’s go.

Pyramids are (apparently) a four-piece from Denton, Texas; this self-titled, running to ten tracks, is their debut album. Beyond that the accompanying press release offers little information – clearly all the powers that be wish the music to speak for itself. And it does, incredibly, but still background is essential for any assessment, to gather a degree of context, of perspective. Pitchfork can’t provide any answers as, at the time of writing, its server won’t respond to my call. So, Wikipedia: zilch. The band aren’t even listed on the Hydra Head Records entry. A hard-to-find MySpace only deepens the intrigue:

“It starts in the upper atmosphere, in that rarefied air where silence sings and time is little more than an abstraction. As it makes its way down through the tree line, to sea level, to the ear canals, elliptical windows and auditory nerves of the great unwashed, the shapes begin to shift. The sine waves become more distinct: swarming, swirling guitars, drums like a churning steam press, a chorus of celestial voices. Instruments collude and collide in a roiling shoal and then dissipate, leaving a cavernous hole, a ghost town, the vestiges and echoes of a brief terrestrial existence. Out in Denton and “other parts of the country”, where seemingly mild psychotropic disturbances can have vast and sinister implications for certain elements within the local populaces, Pyramids conjure the cacophonies of the great unknown, one song at a time.”

But these aren’t songs; they’re not songs in a similar way to how the tracks that make up Person Pitch aren’t songs. Your parents probably couldn’t whistle them. Your parents would wonder what was wrong with you if they found you listening to Pyramids, if they cared, as this veers wildly from the most blissfully serene drone-scapes to intense, terrifying bombast that ripples with instrumental screams more white-knuckled than cadavers in the Ring series. ‘Hellmonk’ could pass as a cut from Vast’s debut, Visual Audio Sensory Theatre, if Jon Crosby had held a séance never to forget with a collection of his most hated enemies during the writing process. ‘This House Is Like Any Other World’ moans like Atlas Sound’s Bradford Cox bullied into a dark alleyway by Fuck Buttons – industrial percussion bleeds from the gaps between ghostly, broken vocals. Everything, throughout, has a touchstone however distant, yet remains resolutely unique, alien to a palate well-schooled in the fucked-up avant-garde.

Guitars trace spectral shapes across a blackening sky, horrors unknown creeping closer from the woods you’d never noticed before – you’ve lived here years, yet never did you realise the trees were so close to the far end of your yard. Dread, it rises up through floorboards, drips down once-white walls. Sound pretty formulaic, some tension-mounting shtick shoehorned into a so-so slasher flick aimed at kids too young to grasp the subtleties of something like The Shining? That’s half of it – the obvious, surface-level discomfort, the disquieting atmosphere that pervades any room Pyramids is aired in. But it’s what you don’t hear that’s more fascinating, what you don’t know. With so little information provided, how is one to know if this isn’t actually the true music of the spheres, the sound of our universe unravelling? Just what is making these noises, the ones that don’t seem to be coaxed forth by human hands? Eerie? That’s a hell of an understatement.

Fans of Jesu will enjoy the boisterousness of some arrangements here, the incessant crushing of the listener’s resistance. Noah Lennox could drift off to the soothing ‘Sleds’, maybe even making a few notes in the process. Me? This tea’s gone cold and I’ve only had it five minutes. Something is most definitely not right about this record. It coasts on malevolence, cajoles the ears with menace. It’s beautiful, amazingly so, when necessary. When you need to be sucked into its hold. And then.

Darkness and silence. Lights out, shut eye. Sink beyond the chair to a place no album should ever take you. Makes you wish, almost, you’d shut the record off after a few seconds for something more formulaic while sweeping the lounge. Would’ve been more productive. Would’ve kept you safe. Would’ve ensured Pyramids couldn’t haunt your dreams from today forward. Hand on heart: still pulsing, but to a beat unnatural. A beat totally weird and totally new.