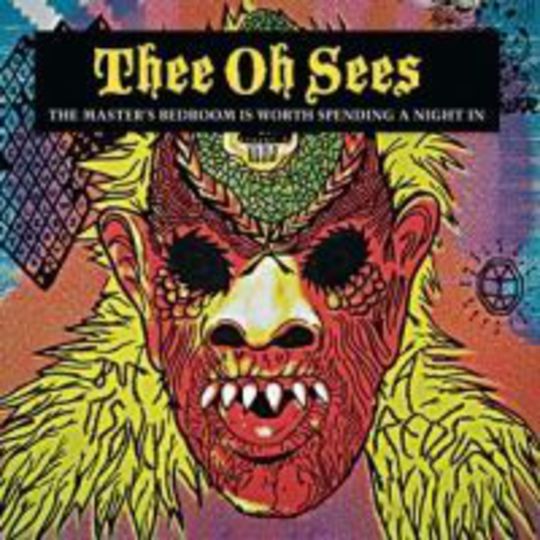 The press blurb for ‘The Master’s Bedroom is Worth Spending A Night In’ says that the record is, like its title, ‘undeniable’. That much is certainly true. Formerly known as OCS, San Fransisco-based Thee Oh Sees are fronted by John Dwyer, perhaps best known for his other bands, Coachwhips and Pink & Brown, both furiously raucous and intense. In each act the keyword was noise, noise paired with garage pop in the Coachwhips, and with wild abandon in Pink & Brown, but still, noise nonetheless. Thus it’s no surprise to find Thee Oh Sees similarly focused on sonic texture - the record (their second under said moniker) dripping with honey-thick layers of sludgy guitars and reverb-laden vocals.

The opening two tracks, ‘Block of Ice’ and ‘Visit Colonel’ are both dark, thrilling interpretations of a bygone sound, all irreverent, indistinct vocals and primal riffs, imbued with a 1950s clatter and verve. They , the young Wild Thing crawling out the primordial swamp. As you would imagine Dwyer’s exploration of the sound creates some fascinating results, tracks like the rip-roaring, fat-free ‘Two Drummers Disappear’ making groups like The Kills seem positively anaemic.

Sadly, it’s a bluster the record as a whole fails to carry. You feel like this kind of rock, even with the esoteric side-winding the group inject it with, is best suited to short, sharp bursts – too many of the songs here exceed their time limit. It may seem like a strange thing to say, but even four minutes seems like too long for a track based around the pure basics; even more so when every song on ‘The Master’s…’ has the same formula - ‘Quadrospazzed’, for example, seems to run out of steam before its finale.

There’s not a bad track on The Master's Bedroom..., but sadly there aren't too many especially good ones either; nevertheless the record’s vigour out of the traps is enough to make it a worthwhile excursion in fifties dynamics, raw and vitalising as they are.