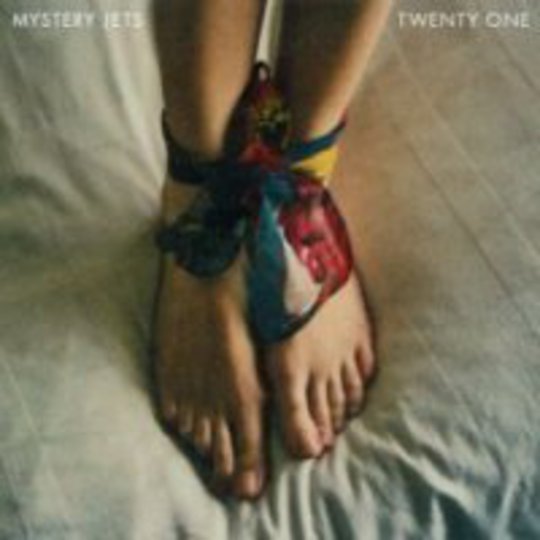 The story of Twenty One is a tale you’ll hear spun countless times over the next fortnight or so, as press focus comes to fall on Mystery Jets. You may be familiar with it already, in fact, if you’d read the interviews carried in the free London dailies or in the music ‘press’; or even online, perhaps in the shape of this interview DrownedinSound ran with the band last week. The story of Twenty One runs thus, then – a young quartet of musicians plug away for years in a practice space on Eel Pie Island, West London, under the tutelage of one Henry Harrison. Father of lead vocalist, guitar and keys player Blaine, Harrison oversees the musical development of the band, feeding them up with early Pink Floyd, Emerson, Lake and Palmer and “loads of prog stuff” while performing and writing with the act on their first forays around the local live circuit.

Those forays begin to attract attention when a clutch of local, South or Southwest London acts – among them Jamie T, Larrikin Love, Laura Marling, Good Shoes and The Maccabees – begin filling bills that offer a refreshing counterpoint to the stultifying, tack-heavy smog of the clublands out over east in Shoreditch and Hoxton. A nascent scene is documented and built up, focused around the Stripes Bar in Brentford and Mystery Jets’ Eel Pie and the Harrisons, as well as Kai Fish, Will Rees and Kapil Trivedi, are in the band seen as leaders of something people will call, for a few weeks, the ‘Thamesbeat scene’. However, their debut album arrives somewhat belatedly and is eclipsed by the efforts of Jamie T and Marling and The Maccabees. Band tries hand in the US, a Henry Harrison approaching 60 retires from tour duties and all’s fairly quiet for several months as the band go back to the drawing board.

Once there, they find local man-about-town and esteemed DJ Erol Alkan, who takes over production duties for the second album and coaxes pop from a band with skills hardened during their time studying “loads of prog stuff” but re-invigorated by a new sense of youthful abandon and independence. The result is a modern pop masterpiece.

All of which is almost true – Mystery Jets’ new album is certainly a fantastic record bursting with life and colour and personality, reaching out towards the listener in slugs of moody bass and dazzling, club-drugged synth lines. But, on reflection, perhaps the hailing of Twenty One as a masterpiece does a disservice to its creators. This is an album as much about the growth of a band, and the process by which the record got here, blasting joyously from speakers, as it is about the songs contained therein – that’s why it felt necessary to include the longwinding introduction. It does have its flaws – in among its twelve tracks (eleven listed, one secret) lurks a dud; ‘Hand Me Down_’ perhaps better for the B-side, though it’d grace lesser albums than this, doubtless.

The main concern with heralding this as Mystery Jets’ masterpiece is the classicism inherent in such a statement – you don’t want to constrict the sense of action and adventure that riddles the record, don’t want to date it and submit it to the archives before it’s had a chance to enjoy the moment that it exists in and is so well-suited to. Twenty One is the sound of guitar music finding its place in London in 2008 but doesn’t take itself too seriously to think that’ll last the summer, past whoever and whatever comes along next. Thankfully, the quartet’s past should see them avoid the pitfalls of zeitgeist convention they’ve managed to confound so far.

Musically, this raids the ‘80s for the only thing left worth taking, tracks like ‘Two Doors Down’ recalling the tableau vivant pop of ABC, while those flaring synth lines, presumably devised by Alkan, fire across the top of the mix in the same way that Antibalas’ horns added much-needed colour to the Foals record. That track is _Twenty One’s discoball hero, building through levels of Smiths-y guitar surf before erupting into a bewildering chorus, sounding like Whitney Houston’s ‘I Want to Dance With Somebody (Who Loves Me)’ as sung by Squeeze or The Kinks. It is ridiculously good.

Elsewhere, free Christmas single ‘Flakes’ provides a more downbeaten glory, rising into yet another chorus whose altitude sets it on collision course with the best moments from the The La’s, ‘Umbrellahead’ sounds like The Walkmen and ‘Veiled in Grey’ brings to mind a band intent on writing their own funeral song, upbeat and, once again, heroic, but without the usual earnest eye-screwing that usually entails. Twenty One revels in fun found in the cobwebbed corners of Alkan’s mix and the nightlifing minds of its lyricists.

But, typically, you get the impression the band weren’t scribbling those lyrics on old bar receipts while they were actually out enjoying themselves. There’s a clarity to the words that can only be found in the hungover hours surrounding noon on a Saturday or Sunday, verses like “I knew that you were thinking of him last night / ‘Cause I saw the blood seep down to your toes / Turn away if you must / But how can you put your trust / In a man who always sleeps in his clothes” thrilling as they unravel in their easy, unlaboured delivery. It’s an ease that suits Mystery Jets as well as their music, and, finally, I can come to reject the term ‘masterpiece’ as the natural growth of this band promises to propel them on and up, into dizzy and deserved, ever-fresher stratospheres.