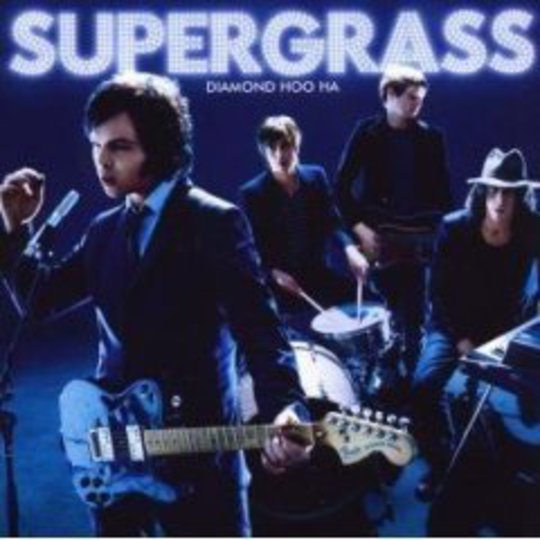 Maturity suits certain bands better than others. Fourteen years on from their fag-toting debut and somehow the prospect of a new Supergrass album is akin to that bit in You Are What You Eat where people are confronted with heaving mounds of congealed junk food to prove what shit-scoffing morons they really are.

Well it seemed like a good idea at the time, Gillian.

Actually the reality isn’t quite so gruelling: the Oxfordshire outfit’s sixth LP is a generally likeable affair with some worthwhile highlights, eschewing the introspection of Road To Rouen for a back-to-basics approach taking in the peppy funk of ‘Rough Knuckles’, the summery, overwrought pop of ‘Ghost Of A Friend’ and ‘Diamond Hoo Ha Man’’s White Stripes-referencing lark.

‘Butterfly’’s darker textures even recall Low-era Bowie and could slot comfortably on the swampy excellence of In It For The Money, while ‘Rebel In You’ has a nice solo in it ‘til you read that sentence back and realise this band used to be better than guitar solos.

But Diamond Hoo Ha sounds completely comfortable in its own skin, and that’s half the problem: while sparing themselves the indignity of trying to fit into another man’s skinny-fit jeans, the anodyne rock crunch of the record (it’s produced by Dig!!! Lazarus Dig!!! helmsman Nick Launay) means the band spends much of the time coming on like the world’s smiliest session bores.

It seems a shame to admit it about one of Britpop’s finest exponents, but rather like fellow soul survivors and noteworthy fans Oasis, they’re a pub-rock dullard’s dream with the punk edges sanded down, channelling the spirit of various suspect figures from rock’s back pages – The Who, Thin Lizzy, T Rex – into a retro package that’s more of a glammy stodge than a jammy dodge.

Briskly performed, smartly assembled and largely unmemorable, Diamond Hoo Ha is a lot like half-asleep sex; you’re vaguely aware this is supposed to be fun, but you keep drifting off, and you might have to ask the person sitting next to you if it actually took place come the morning.