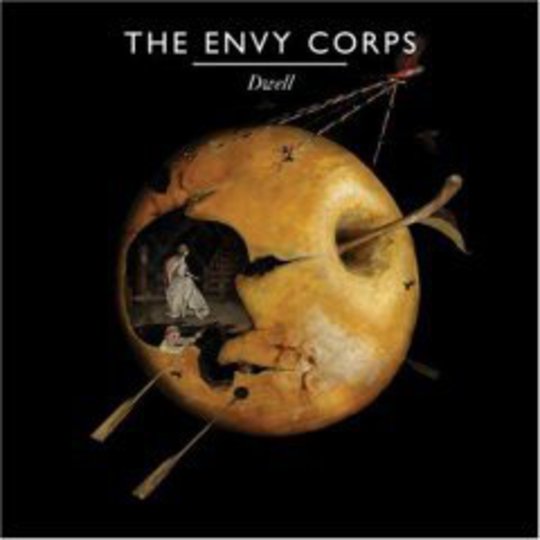 The Envy Corps underwent a difficult set of circumstances this past year. Despite finishing this, their debut album, well over a year ago, it remained unreleased, gathering dust on the shelf at home because circumstances forced the record to stay put. Last year, as the Iowa-based band introduced Dwell to UK audiences, guitarist Brandon Darner suffered a stroke on stage, ultimately putting all plans for the record and the band on hold. Thankfully, a full recovery was quick as the band returned to the stage eight months later to rapturous applause at home.

It is a lovely little triumph over adversity by-line, one especially powerful once Dwell digests. This is a quietly heroic record, a pop album bursting with art-rock hooks that are, for once thankfully, completely absent of cynicism or any hints of that tiresome, skinny jeans aesthetic. Here, finally, we have a sprawling, altruistic record, one built by championing honesty and substance while completely ignoring style. This is not a hip record in any sense, but it is surely refreshing, a Coldplay for those who hate Coldplay but still fall for sweet melodies regardless. Simple: this is real, truthful music.

Okay, I know The Envy Corps inhabit the same reign as the aforementioned ‘Yellow’-faced superstars, along with Counting Crows, Dave Matthews Band and Clocks. But set that aside for a minute, dissolve any notions of association and concentrate on Dwell. Really, dwell on it. Melody is not largesse, never implanted into each passing bar in an effort to please a sorority. It is careful and pragmatic, revealing on what it needs to, not what it is compelled to. Also for once, just once, the string accompaniment enhances the lot, rather than the usual result, a plunge from endearing to overindulgent. There is not a note of pretension in Dwell and never a desire to be melodramatic, just for the sake of being melodramatic. It’s purely honest, music for the love of music, absolutely serene. Sure, ‘Before the Gold Rush’ wisps and woes through branches of religious self-loathing turned soul-seeking, unleashing lyrical question marks such as “I tried and tried but it all went wrong,” but in a rare moment of clarity in a genre devoid of it, the song comes off in earnest. The Envy Corps are not faking this. They actually care.

Take ‘Keys to Good Living’ for example. The religious intonation (and beware that the album does come off quite Christian at times, lyrically) and seeming over-zealousness of the subject matter could come off queasy, but The Envy Corps pull it off. Bells and choral backing vocals accent a slow but ever-increasingly clean melody pulsating with art-rock, pop and post-rock set aside some lyrical demon purging. Sure, the “keys to good living” may not “be found in the doors of saints” as the band suggest, but the steam bellowing beneath the proselytizing is not overbearing. It is earnest, again asserting that all this is not an act with The Envy Corps. This, in every which way, is the real thing. ‘Party Dress’ raises the tempo slightly, recalling Mute Math and more Coldplay, but comparisons aside, it is an exercise in vocal skill, melodic substance and giving a shit about life. Musing about your sister’s ill-witted alcoholism is more interesting that inane chatter about Roman politicians, even if the answer to bettering oneself, according to The Envy Corps, is Jesus. Caring comes in many guises though, and never once does Dwell leave things be. It attacks issues it deems troubling, offering what it sees as a solution, regardless how partisan. Even ‘Sylvia (The Beekeeper)’, an ode to Plath herself, successfully straddles the right line between glorious and god-awful, again arguing for self-improvement through whimsical, clairvoyant melodic work. It is satisfying, saccharine and utterly refreshing, topping up this set of half-full glasses to full, never leaving anyone without a drink.

Rarely has a collection of songs emerged that speak so frankly with absolutely no pretence or stylistic packaging. Dwell is proof that music can mean much more when it is stripped of a scene and allowed to breathe.