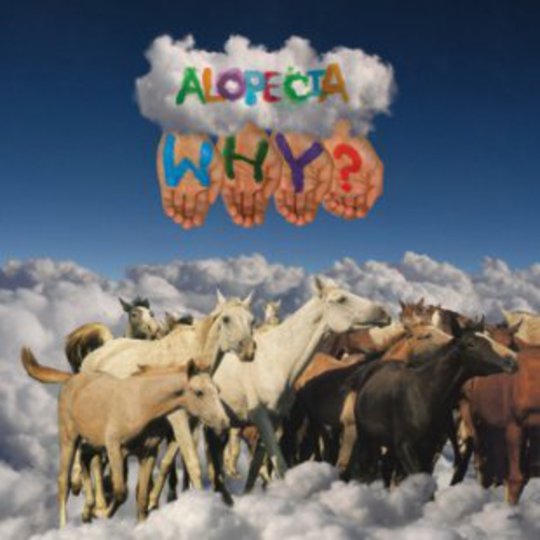 It’s initially about these few precedents.

One, go way back. cLOUDDEAD were, no more, but nevertheless their significance ripples through modern hip-hop still, two albums – after a fashion – of skewed beats and thoughtful prose wedged into ill-sized spaces ‘tween hi-hat tickles and Odd Nosdam-spliced skitters. They didn’t fit any scene, they never ploughed paths well-travelled by so-called peers. Their uniqueness is assured, bronzed forever more by their 2004 split. A trio splintered: Yoni Wolf finding creative catharsis with Why? on a fulltime basis ever since.

Two, Elephant Eyelash: Why?’s last album proper is rightly recognised as one of the finest of its release year, 2005. The first album crafted with a full-band set-up after Wolf’s solo endeavour of 2003 Oaklandazulasylum, it saw its lynchpin begin to attract attention from corners of the music press formerly unmoved by what was pitched on paper as hip-hop. Elephant Eyelash bore little similarity to anything approaching the conventional in said pigeonhole, instead fusing folk-styled arrangements with a rap attitude that clashed diary-pages prose with fantastical lyrical twists. It was like Eels gone wrong, less open-hearted but vulnerable nonetheless; a fascinating insight into an ambitious musician’s mindset that still feels fresh with each occasional listen.

Three’s a doozie: Elliott Smith, Mark Everett (aforementionedish, but allow it), Conor Oberst (not me but many)… these artists are canonised as masterful image-misers, capable of fully rendering an experience through words alone, drawing vivid pictures in the mind’s eye. They’re all up there on pedestals personal, around the world; time’s right for another to join them methinks, and with Alopecia Yoni Wolf has delivered a record perfectly comparable with any so-called best of the collected reference artists listed a few words ago. A collection of songs that sometimes buckle under the weight of their own graphic natures, Why?’s third album is as absorbing an experience as any initiated admirer could have hoped for. Complete newcomers are going to have their heads spun.

And off that tangent, to another; more focus for a brief few utterances. The facts: Alopecia sees the Why? band expanded from three to five with the addition of Andrew Broder and Mark Erickson of Fog; it was mostly recorded live in a Minneapolis studio; that moniker, for latecomers, is derived from Wolf’s old graffiti tag. Now I feel we’re on a level, you and I; I can delve deeper and you’ll follow, right? ‘Cause that’s the only way this piece is likely to go given the background’s established and the set-up’s readied for the money shot… scroll if you must, impatient some.

Wolf’s lyrics are exponentially open to considerable analysis, sometimes face-value and elsewhere complicated by analogies too personal to ascertain any bedrock of truth from. At their most literal there’s a tenderness few rappers possess, if we’re still in the business of categorising Wolf as such a vocalist. “Even though I haven’t seen you in years, yours is a funeral I’d fly to from anywhere,” is such a moment, midway through ‘These Few Presidents’ – the title a nod to pocket change rather than any change-the-world leaders; they have no persuasion over God, as our protagonist states in a tone mournfully accepting. Arriving at track three, the song’s the mid point in Alopecia’s first half of lonely overtones and claustrophobic atmosphere – brightness doesn’t descend ‘til ‘Fatalist Palmistry’ delivers the too-perfect lines: “When we say your name our tongues catch flame / And you wonder why we ain’t got nothing to say.”

Before this break in proceedings, Alopecia shuffles in a manner entirely comparable, again, to the work of Eels – personal tales of heartache set to arrangements designed to stimulate the body as well as the brain, to singe the soul with universal feelings twisted into new shapes. Lead single ‘The Hollows’ seems to summarise the frustration our artist has felt over the album’s gestation period: it’s a semi-celebratory “fuck you” to any ailments affecting progress, but also broken by an on-the-road isolation expressed via an acerbic delivery and lyrics relating to a weak pilot light and Wolf’s own hiding behind a mask of his own making – facial hair makes a new man, for better or worse (and the title is, presumably, taken from a refreshing shave, metaphorical or otherwise). But the slate’s clean now, flashes of beauty making the travails worthwhile – being ripped off by walnut shell gypsies can be forgotten. Besides, they’ve probably got knives.

‘By Torpedo Or Crohn’s’, the album’s penultimate offering, finds Why? returning to song roots most introspective – slightly dark, with a steady flow of consonants and vowels recalling Buck 65 when his quality control wasn’t so partial to misfiring. A gentle background “la la la” refrain dances spectral beneath solid beats that comprise this album’s ‘most’ hip-hop moment; that said, it’s still far from the accepted norm, with many other moments more comparable to the clattering rhythmic confusion mustered by Animal Collective. The short, sharp finale, ‘Exegesis’, seems something of an anticlimax considering what’s preceded it, but as its squelches and buzzes conjure memories of Sorry!, which can never be deemed a negative in a critique.

One of the final lines here states “Stalking’s my whole style”, but what’s evident again throughout Alopecia is just how few artists Yoni Wolf apparently draws influence from. He’s alone in a field of his own making – worthy of ranking alongside this generation’s greatest lyricists but with a compositional nous that’s beyond millions, and one that seems to have developed so naturally that you can only suspect intervention from a higher power. The first would-be to bite Why?’s style is likely to be chewing more than they’d bargained for, and chances are they’ll have to spit it clean out. There’s nothing else like this out there that’s as perfectly realised as this, and to draw upon previous, albeit indirect precedents, that leaves only one outcome from this unruly verbiage.

Misadventures Of A Broken Man