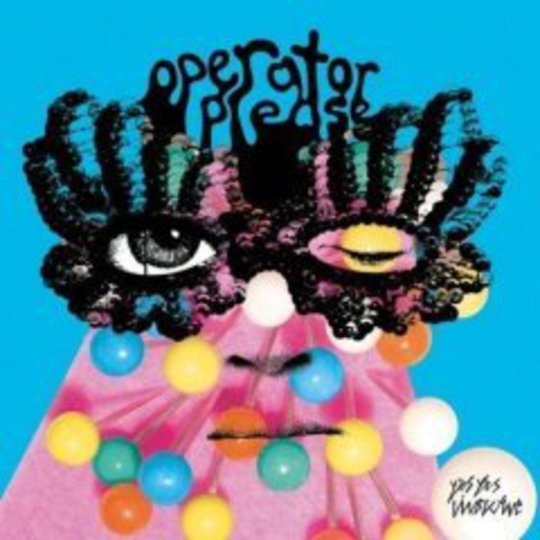 Yelpy kids with choppy guitars, Australian five-piece Operator Please are what oldies reckon Skins kids are rocking to, failing to point their ears the way of Crystal Castles and what’s really going on. ‘Cause fairly, there’s no way day-glo-clad junior druggies would be caught lurking at the back of the canteen with this one-dimensioned exercise in forced hyperactivity and shoehorned showboating that feels so very at odds with the primal histrionics of chief bleater Amandah Wilkinson.

Who, it should be said, must be dead (or not) chuffed she’s not Canadian – if local general practitioners didn’t feel the need to sedate her into silence ahead of the limited musical maturity on display here – think Be Your Own Pet without the underlying currents of potential violence, flick knives and spit; sugar-coated rather than puke-soaked – then surely the once-a-year clubbers would have their way eventually. I imagine baby harp seals sound a lot like this, ‘Terminal Disease’ and ‘Just A Song About Ping Pong’, ‘Yes Yes’ and ‘Zero Zero’, as they’re bludgeoned – it’s as curdling as an innocent’s dying screams, anyway.

Slightly unnecessarily over-the-top analogy spent, the fact: Yes Yes Vindictive is really fucking annoying. It’s a mountainous muck-up of drawled squeals and tired rip-off riffs, quirked-up Los Camp! styleee by the odd bow-on-fiddling, borne of molehill-proportioned musical know-how. Forgive ‘em for their wet-eared angles and enjoy the youthful exuberance on display? Fuck that, truly – we’ve all heard enough albums, by artists old, young and everything between, to know bad as from bad ass.

You could accept the musicianship’s limitations and end on a high – potential for sure, six outta ten, let’s see what happens next. But with Wilkinson up front Operator Please are never likely to crack a smile on a critical face, let alone the mainstream market already sickened by lapping up too much Gossip these past two years. She’s like a car alarm at 2am when you’re shattered and cranky, when all you want to do is brick the windshield and pull the wires from the footwell. Pray for tonsillitis, laryngitis, somethingitis. Anything but a follow-up.