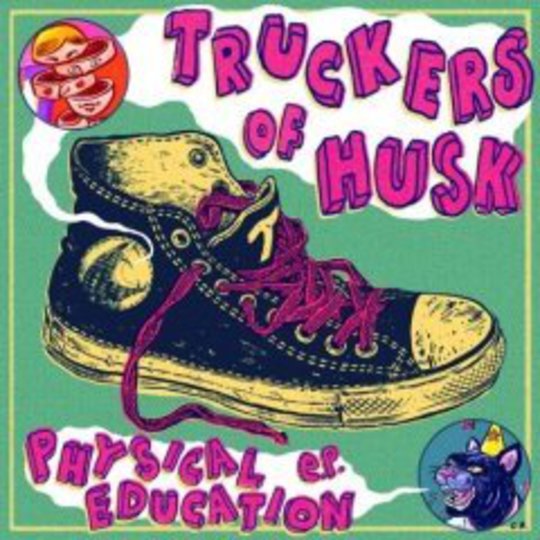 Math Rock... it’s become one of those terrible terms used to lump together bands with a vaguely similar sound, making it easier for people like me to tell people like you what a band is like without either of us really having to engage our brains. So, when the term starts popping up around Cardiff quartet Truckers of Husk’s debut EP, it’s time to elaborate.

The Physical Education EP, encased in a kaleidoscopic palette of cartoons, dance steps and polka dots, is a rather mixed affair. From chugging guitars to carbonated bone-crunchers, beats flailing every which way and tempos speeding then dwindling like shots of caffeine fading into the blood stream, these are iPod soundtracks to turn your day from mundane to super-hero epic with the swift click of a button; from staccato drama to marshmallow comfort in each and every story.

Standout track 'Salad Ballad' is a noodling star-scattered instrumental where harpsichord-style guitars smatter against cello swells and fizz away like ‘Greensleeves’_ gone rock. A stark contrast to the waltzing schizophrenia of 'Panther Party', which culminates in a shrieking mantra of undecipherable tones.

There are points where you can’t help but crave an extra ‘something’, like the climax hasn’t quite come, or another layer of sound has been accidentally missed out of the recording. But as debut releases go, this is up there with the best. Foals this certainly ain’t, but math-rock had better watch out.

Late Of The Pier, The Displacements, A Place To Bury Strangers, Collapsing Cities at Camden Barfly,