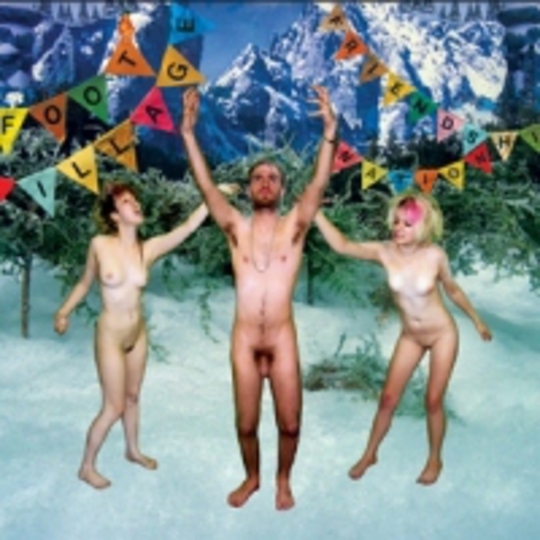 The apocalypse shall come, society shall be crippled, and these buffoons will be jabbering away as if nothing happened.

From the same cesspit that fellow noise-mongering beserkers Kevin Shields, Pocahaunted and Los Angeles’ most diseased noise mavericks rose from come Foot Village, a mutant hybrid made up of members from LA headache-merchants Gang Wizard and Load mainstay Friends Forever, with Brian Miller, head honcho of LA DIY imprint Deathbomb Arc’s (recent releasers of Thrash Sabbatical, review), the prophetical chief of this cult community leading them on their ramshackle procession.

Starting as they mean to go on, Miller and his Luddite cronies offer up a brand of neo-tribal haunts produced using non-electrical instruments in a procession that is back to year zero in about every way possible. ‘Urination’’s Lightning Bolt assault is a blundered thunder, a rampant death roll slowed down to a drunken tumble. Think of Liars’ imperious Drum’s Not Dead but with incessant Jackanory rhymes and riddles (“I like pee-pee in my coat / I’m not afraid to eat my greens”) replacing stout Gregorian chants and kindergarten percussive snapshots instead of meticulous totemic drum factions.

But whilst the dufus drum punk of ‘Narc Party (Let’s Make It Fucked Up)’ and ‘Erecting the Wall of Separation’ is like an uncomfortable lobotomy-sound, the sound of your mind being dismantled by a fumbling toddler, this destitute toxic wasteland, produced by Euro-pop perverts Captain Ahab’s Jonathan Snipes and mastered by drone-merchants Yellow Swans’ Pete Swanson, is not all that bad once you bed down and find comfort in your own soiled kegs and the unhinged company, with ‘Crow Call’ and ‘1998’’s groin-stamping shenanigans a banal brand of acoustic noise assault which, in fact, seems over before you’ve really got your teeth in to the company.

After two untitled tracks allow a silence to break in and the chaos to ebb away, it breaks back in with the reckless use of electricity as four remixes are melded onto the tail end of the record, with Tussle tidying up ‘1998’’s beats into neat piles before Robedoor’s re-jig of ‘Projective Nourishment’. It leaves Friendship Nation spinning out in a gurning delight, all dressed up decent ready for civilization, as heads turn from earlier atrocities.

Drum Is Dead. These jerks broke it.

Nick Cave And The Bad Seeds