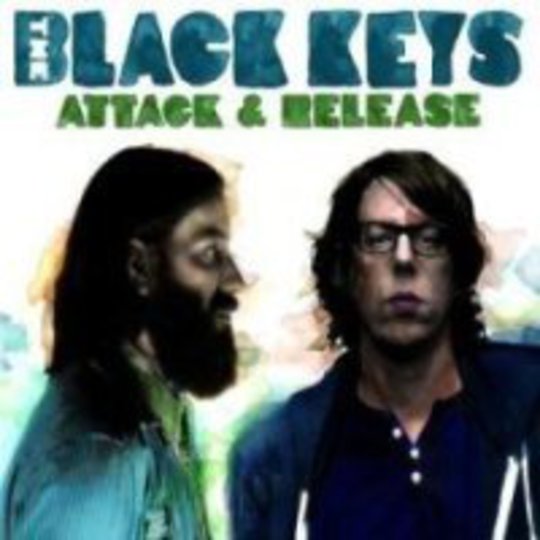 The story of many bands’ progress is a trade-off between the visceral and the virtuosic, attitude and musicality: as much as Exile On Main Street stands out as the obvious pinnacle of The Rolling Stones’ musical evolution before the rot set in, it’s doubtful they ever eclipsed the early likes of ‘Satisfaction’ for sheer delinquent thrills.

Five albums into their careers and The Black Keys find themselves at a similar tipping point, instinctively sounding out new textures while losing some of the ragged crunch that made them their name in the first place. That Attack & Release comes forearmed with an intriguing backstory is in the end purely incidental, but here it is for you anyway.

Initially approached by Gnarls Barkley mastermind Brian ‘Danger Mouse’ Burton to contribute music to an album for infamous R ‘n’ B legend Ike Turner, the project was scotched following Turner’s death from a cocaine overdose late last year. Both surviving parties expressed willingness to carry on, and the pieces were picked up under the guise of a new Black Keys record.

The venture’s roots as an album produced for an ageing rock ‘n’ roller should give you a clue as to Burton’s contribution here: discreet, to say the least, with only the odd instrumental flourish and heavily-accented snare (as on ‘Psychotic Girl’’s back-porch creep) immediately recognisable as the wily producer’s handiwork.

Given space to breathe the band have responded with their most varied set to date, dipping their toe into southern soul with rocks in its pockets (the gorgeous ‘Lies’) and witchy R ‘n’ B_ à la _Screamin’ Jay Hawkins to name just a few.

Consequently the muscular riffage of lead single ‘Strange Times’ is great but feels almost concessionary in light of more expansive material that permeates elsewhere – ‘All You Ever Wanted’ is a Jagger-esque country ballad minus the irony, and while we’re on the subject, ‘Things Ain’t Like They Used To Be’’s world-weary AOR bloat is to ‘The Lengths’ (a highlight from 2004’s ‘Rubber Factory’) what The Stones’ ‘Angie’ was to ‘Wild Horses’, if you get my drift.

There are guest contributions from Tom Waits collaborators Marc Ribot and Ralph Carney (drummer Patrick’s uncle), and the tremolo on ‘So He Won’t Break’ definitely has something of Waits’ post-‘80s output about it, but Dan Auerbach’s vocal is too sober to make the piece really spark, while ‘I Got Mine’ is one of their trademark bruising workouts romping along with all the sloppy abandon of hirsute pornography.

But in the absence of the kind of hairy-palmed killers that used to sucker-punch the critics into submission their trad-rock roots are catching up with them – everything’s rendered with sincerity and intuitive grace, yet the band lacks the songwriting firepower to make much of it really stick, and parts of the record lapse into (admittedly seductive) cliché: “I’ll be your blackbird darling, hanging on your telephone wire / spread my wings, darling, and set your heart-a fire” (‘All You Ever Wanted’).

It’s a problem encapsulated in Auerbach’s attractive croon, typically described by all and sundry as ‘whisky-soaked’. But, sure as an inverted sentence structure does not a startling insight make, medicine for the soul rarely tastes so good, and I’m not sure if his honeyed-gravel tones don’t slip down a little too easily to be fully interesting.

In the end we’re left with a solid, sympathetically-performed record that only intermittently comes to life, which is either a subtle victory or a hollow triumph of taste over gutbucket soul, depending on which way you look at it.