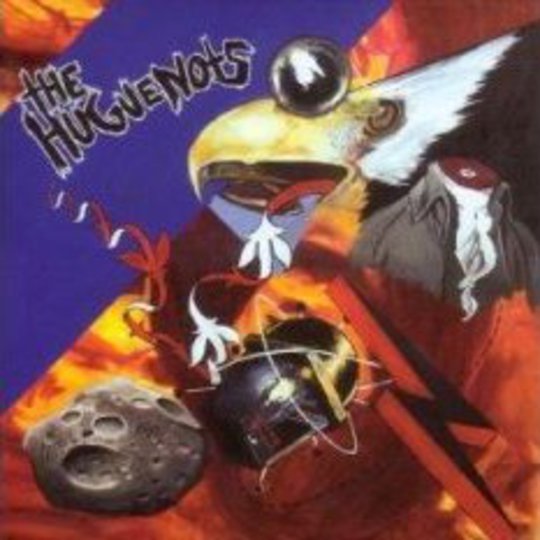 Would Hydra Head be reissuing everything The Huguenots ever recorded if they hadn’t contained members who would go onto play significant roles in the punk underworld as parts of Piebald, The Explosion and, most notably, Converge? Maybe, maybe not. But they are – so let’s start at the beginning.

The Huguenots were a mid (ish) ‘90s punk band who specialised in a strange mixture of snotty old-school (think Black Flag without quite so much irony) and the thick, sludgy hardcore that bands like Botch would go on to eventually perfect. Whether they were a crucial band in and of themselves is a moot point – the bands they spawned are much more likely to be put in the box marked ‘influential’ – as their Discography is an interesting close-up on a scene that was about to see some of its contemporaries start to make lots and lots of money indeed but that also wanted to innovate as much as just rock out.

Sixteen tracks but only 11 songs – as the tracks from their split with now-forgotten gobbers SevenPercentsolution are included and subsequently duplicated on here – it’s the shorter blasts like ‘Send It Airmail’ and the newer version of ‘Postscript’ that really show off The Huguenots’ appeal. Miniscule blasts of punk anger and violent energy that seem to fall over themselves in their attempts to get to the finish line, the former shows the beginnings of the progressive hardcore that, among others, Converge (obviously) would become known for. It’s like two songs in one; an opening of one-two drums and shouted lyrics that border on the unintelligible, followed by a thick, bass and shrill, piercing guitars that become a discordant symphony of sorts. ‘Patient Zero’ continues the theme, with frantic chords tumbling into riffs that are played slightly too fast for them to be really catchy but at just the right speed to achieve maximum impact. It’s knackering to listen to – in the best way possible.

It’s on ‘Horde Of Bees’, perhaps the most complete song The Huguenots ever recorded, that their continued relevance is finally asserted. Displaying a grasp of dynamics that stretches beyond the normal quiet/loud dichotomy, it’s a masterful demonstration of the raw guts of songwriting; when to plug something fiercely simple and when to take a brief pause for a more technical, head-scratching section, when to ease off and when to dive head-first into noise. Yeah, it’s hardcore, but if you’re still writing off that word as shorthand for ‘possessing hair-straighteners’ then you’re coming up to being a decade and a half too late.

As a historical document Discography rates as more than interesting but not quite essential, but as a raw collection of songs it’s definitely work a look if you like your music unpretentious, ambitious and noisy.