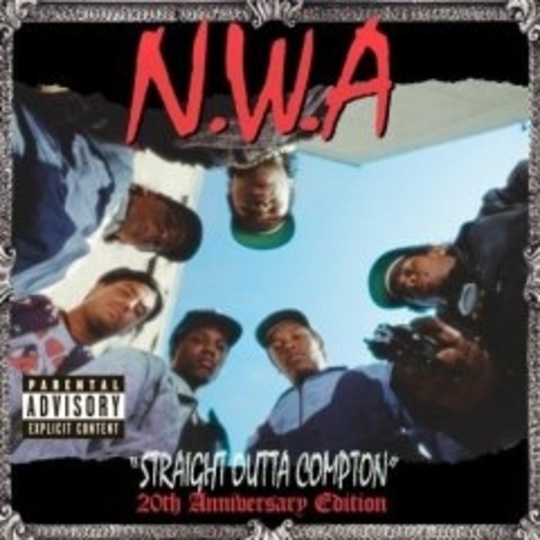 “You are now about to witness the strength of street knowledge,” rasps Dr Dre’s understated invitation to step into the slums of late ‘80s South Central Los Angeles. It has become the stuff of pop-lore that the fledgling art of gangsta rap was on the cusp of serious business in 1988 and, for good or sheer terror, N.W.A’s Straight Outta Compton delivered an effective, skewed flip-side to the comparatively languid vibrations of De La Soul and the ‘daisy age’ crews that were emergent in tandem. Though MCs like Kool G Rap were adept at blurring the light and dark sides of hip-hop, N.W.A would set the b-boys apart from the self-proclaimed ‘G’s’ and erase the shades of grey.

Written predominantly by O’Shea Jackson (though 'Ice Cube' was the moniker he’d use to claim his infamy) - an outspoken 18 year old with a booming, bassy voice - and produced by Andre Young (Dre) with his former World Class Wreckin’ Cru sidekick Antoine Carraby (DJ Yella), N.W.A’s second LP traded much of the party up ethos of their debut for an antagonistic bravado that usually went way beyond the more playful, lyrical braggadocio so intrinsic to the battle-rap movement of the day.

With the cackling delivery of Eric Wright (Eazy E) and off-tempo rhymes from Lorenzo Patterson (MC Ren), the expletive-ridden syntax wrapped around Dre and Yella’s dextrous forays into soul, scratch and funk-sampling would eschew the cerebral bombast of Chuck D and KRS-One to plumb new depths of foulmouthed agitation and coin the immortal mantra that got everybody's mother up in arms: "Life ain't nothin’ but bitches and money."

With such amoral values, pilgrims and passers by alike were drawn into the Niggaz With Attitude’s rundown inner-city drama to hear out an anarchic slew of constituent demands and bear witness to the kind of misogyny that landed 2 Live Crew in censorship hell. The rest is ingrained in rap music’s soil, and Straight Outta Compton would steadfastly become the west coast’s gangster-flavoured compound of all that hip-hop could be loved and feared for - a hard and fast test of America’s sacred First Amendment.

The carpet bombing of its opening salvo, from its swaggering title track through their battle cry of ‘Fuck tha Police’ to the pounding ‘Gangsta Gangsta’, were enough on their own to thrust the threat of gang hysteria under the magnifying glass in the US. As Ice Cube would later say himself, the LA Riots that followed just a few short years after Straight Outta Compton’s release would have come as no surprise to anybody who ever heard N.W.A. That the group would achieve swift infamy for their glorification of police hatred was a no-brainer, and stances like it would earn a letter of disdain directly from the FBI and cost them mainstream support.

Seizing the last laugh with this 20th anniversary edition, in 2008 Straight Outta Compton is as perennial as It Takes A Nation of Millions to Hold Us Back in the context of hip-hop’s canon. Looking back now? It can all seem so daft: between Ren’s abstract warnings ("Whenever I’m stepping, cover your head, like an ostrich") Eazy’s bizarre boasts ("I’m a brother that'll smother your mother") and Cube’s role as warped relationship councillor ("You want lobster huh? I’m thinking Burger King"), the album thrives on chaos theory. Case in point: the Bomb Squad-inspired production of the otherwise charmless ‘Dopeman’ is what saves the song from bringing a shudder to the spine: "If you see somebody getting pussy for crack, he's the DOPEMAN!" Almost righteously, the point where Straight Outta Compton succeeds to its best effect is on the only profanity-less track on the album: “It gets funky when you got a subject and a predicate,” reasons Dre on ‘Express Yourself’. See, they were a sensitive bunch of lads all along.

Though the classics are all here to speaker-bursting effect in EMI’s latest take on the most infamous chapter of the N.W.A legacy, the extras from Straight Outta Compton redux are a step sideways from 2002’s Capitol remaster. Extended mixes of ‘Express yourself’ and ‘Straight Outta Compton’ are swapped out for phoned-in treatments of ‘Dopeman’ and ‘Fuck tha Police’ by Cube and Eazy’s protégés Mack 10 and Bone Thugs-n-Harmony. Snoop Dogg steps in with C-Murder and a live band to salvage this portion of the effort with an update on ‘Gangsta Gangsta’, embellishing with a tripped-out medley of Snoop’s original Dre collaboration, alluding to the ‘g-funk’ era that would begin with ‘Deep Cover’.These pastiches hold no sway on the authoritarian-baiting sneer of the originals, as an album that influenced a generation of rap's subgenres in the face of those who decried - and still can't handle - its place in the musical spectrum.

Without Ice Cube’s input, the writing behind their Billboard number one, Efil4zaggin, went on to exaggerate this no-holds-barred style of storytelling to the point that it took a swan dive into rapist wit before the group imploded after only a three-year existence. That’s not to say Cube didn’t give them fair warning of the inevitable, as he so succinctly spat on ‘Gangsta Gangsta’: “Do I look like a muthafuckin’ role model?"