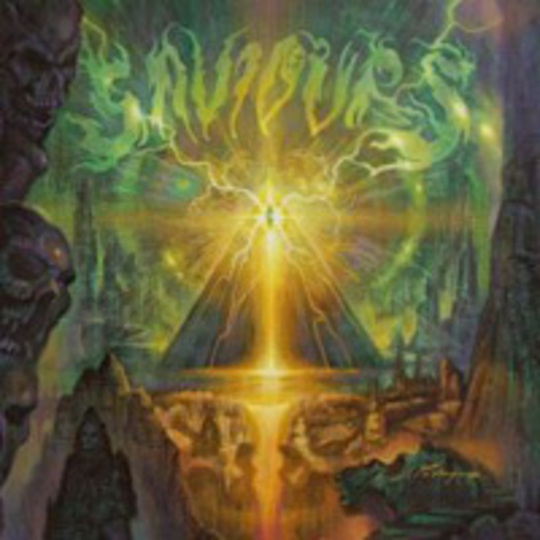 Before we even get into the music here, let’s all take a couple of seconds to admire the artwork of Saviours' second long-player, the Evil Joe Barresi-produced Into Abaddon. Skulls carved into rock faces? Check. Massive pyramid with an evil eye spewing electricity or something? Check. Said static turning into toxic clouds spelling the band’s name? Check. Everything here spells ‘brilliant’, and if you can’t see that too, click away now.

Saviours – natives of Oakland, California – formed in 2004 after guitarist Austin Barber (with a name like that you have to front a band) and drummer Scott Batiste (less so) reached the end of a “vision-quest”; like what Native American Indians go on to determine their path in adult life. Truth be told: me neither, but it sounds fantastic. And ridiculous. Both adjectives apply to Into Abaddon – this album is a headbanger’s best friend, an air-guitarist’s favourite indulgence to be; it’s devil-horns aloft and foot-on-pretend-monitor posing ‘til the girlfriend comes home and demands to watch ‘Enders.

Check these song titles:_ ‘Cavern Of Mind’, _‘Narcotic Sea’, ‘Firewake Angel’. If the four members of Saviours don’t at least have a couple of tongues in cheek when settling in for some serious rehearsal time, then something’s gone seriously wrong with the world. It’s rotating backwards, dragging us back to a time when metal was honest and true. Wear those jeans – give a fuck if you can’t fit even a nickel into the front pocket, so tightly are your legs squeezed in there. A quick aside to Hoxtonites everywhere (and you are): you will hate this. No ironic appreciation, please.

Because, frankly, Saviours don’t need anyone’s sympathy – they’re channelling the spirits of twin-guitar metallers of the recent past, for sure, and doffing a filthy trucker cap to today’s masters – High On Fire, Doomriders, Torche, Baroness, Mastodon – but they sure as shit ain’t riding any coattails, and nor are their righteous riffs to be scoffed at as hackneyed imitations. These muthas (yes, I feel ‘muthas’ is an apt noun for this piece; don’t expect to read it again this year, though) rule (yes, I feel ‘rule’ hits the nail fairly squarely on the head; laugh it up, you tiresome intellectuals who’ve forgotten how fun it is to just let go).

Brilliantly and fantastically ridiculous, the only real crappy cop-out here is an annoying fade-out on ‘Cavern Of Mind’, four of seven. Presumably it was considered worthy of inclusion as it makes the next thunderstorm of cacophonous fret-mangling, ‘Mystichasm’, sound like the FX track to the new Rambo trailer: ker-pow blam bang. Chugga-chugga wail scream. And oh mammmmma… the twin guitar work is dizzyingly awesome throughout. Someone needs to take these dudes out for an all-they-can-eat steak dinner as way of sincere thanks.

Batiste, who writes these songs on a knacked bass guitar, reasons: “If it sounds good through really thick, fucked-up bass, it’ll sound even better coming from all of us.” I can’t argue with the man’s spot-on logic. Into Abaddon is some sort of sick genius, designed perfectly to bring out the animal in the tamest of indie dorks. It’ll rank as the best album of its kind in 2008… at least until that fourth Mastodon album arrives at the DiSopolis.