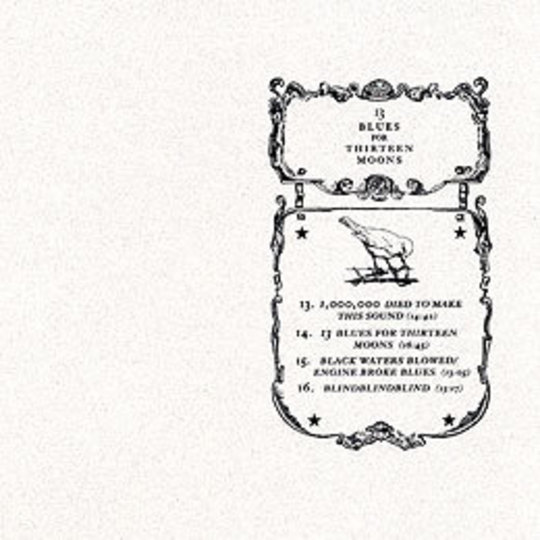 Two distinct factions exist within the music reviewing fraternity: there are those quite prepared to give a record a flawless commendation and those who would never entertain such notions of perfection. I belong to the latter sect, believing that absolutely nothing merits a glittering array of 10 golden stars. Of course, it’s an entirely different proposition when dealing with a five-point scoring system – a full house tends to equate to a 9 on big brother’s more expressive scale – but, to this hack, a 10 is the equivalent of ringing the bar-room bell at the end of the night. Everyone should just give up and go home.

Thus far, nothing has persuaded me to reconsider this stance – that is until now. Because Thee Silver Mt Zion Memorial Orchestra & Tral-La-La Band’s [for the purpose of space saving, this mouthful of a moniker will be condensed to Silver Mt. Zion from here on in] 13 Blues For Thirteen Moons is, quite simply, one of the records of 2008, perhaps even the decade. Make no bones about it: this gargantuan beast of an album is the reason for those woofed-up, bass-bulging speakers sitting on your shelf. Christ, Efrim Menuck’s fifth full offering with Silver Mt. Zion may even be the reason for this and every other music site’s existence on the face of planet t’internet.

Excited yet? You really, really should be.

In keeping with the title’s theme, the record doesn’t actually begin until - surprise, surprise - track 13. Up to that point the airwaves are impeded by 12 untitled cuts consisting entirely of linear drone, ensuring baffled glances are flashed towards the CD player and those cowering neighbourhood mongrels are busy striking the record off their end of year hitlist. But this intro is mere scene setting, a build up to the enthralling, anger-driven pandemonium to come. And when it comes, by fuck does it come.

Opener ‘1,000,000 Died To Make This Sound’ begins with a harrowing vocal recital that sounds like it’s been whipped into an echoic frenzy from the bottom of a disused silo before spewing out a sludge of primal drums, savaging guitar and grating violins. Menuck’s off-kilter wails are extraordinary, shooting straight through this wild symphonic storm with untameable ferocity as he yelps “your band, your band is bland, your band is bland ambition” with pious intent. It's a statement that leaves no doubt; other acts are merely unseasoned, unpalatable aperitifs when compared against the fired up, char-grilled flavours of this Canadian banquet.

Production-wise there’s a feel of Liars’ Drum’s Not Dead to the blueprint of 13 Blues… but, whereas Andrew Angus’ mob of miscreants often descended into vicious swamps of uncoordinated feedback, the pairing of Howard Bilerman (former Arcade Fire sticksman) and Radwan Moumneh (the band’s live soundman) have engineered a more purposeful and coherent direction. By allowing the record to ascend as sharp slitting shots of instrumental chaos before retreating into barren atmospheric chasms, they’ve created a bubbling volcano of sound that leaves little clue as to when the next scorching eruption of molten post-rock will besiege eardrums.

And in this lies the most enthralling aspect of 13 Blues… - the anticipation, the not knowing. Previous LPs like Horses In The Sky or He Has Left Us Alone... were at times bleak, barren deserts in which rumbling storms of sound could be heard building long before erupting in the eardrums. But 13 Blues… is a flash flood, an album that saturates the senses with a surge of acerbic, sledge-hammering riffs and drenching orchestration, leaving minds dumfounded and completely uncoordinated in the belly of this titanic aural siege.

The title track is exactly how the apocalypse should sound: a 16-minute shock of chaotic drumming and screaming vocals that explodes with venomous guitar tussles before subsiding into pleading reverb that’s finally dismissed by a swathe of unrelenting instrumentation. Less rabid pace-wise but equally as terrifying, ‘Black Waters Blowed/Engine Broke’ builds slowly into a peak of sniggering strings and discordant percussion until eventually relenting as an ale-swigging tankard that ends with Menuck howling, “We’re building trainwrecks in the setting sun”. He sounds like a rabid-eyed wolf pining to the moon.

Then, suddenly, all is calm. Album-closing opus ‘Blindblinblind leads you serenely to the afterlife, glowing with twinkling cello-plucks and enchanting, dew-soaked harmonies. Displaying all the hallmarks of a desolate punk masterpiece, the track finds Menuck’s pleading crows tinged with the teary eyed edge of Joe Strummer at his most reflective. Utterly magnificent to the point of astonishment, it’s an enveloping finale to an album that stretches beyond emotional boundaries and embeds itself within walls of the heart.

So here’s the stickler: 13 Blues… scores 10 in almost every sense, but to award such an accolade would imply this is a record never to be bettered. And, with a group of musicians as precociously talented as Efrim Menuck and his divine orchestra, it would take a brave man to make such a bold statement.

It's My Own Cheating Heart That Makes Me Cry

You Me The Switch, Vessels, Kontakte, Instruments at Buffalo Bar, Islington, Wed 13 Feb