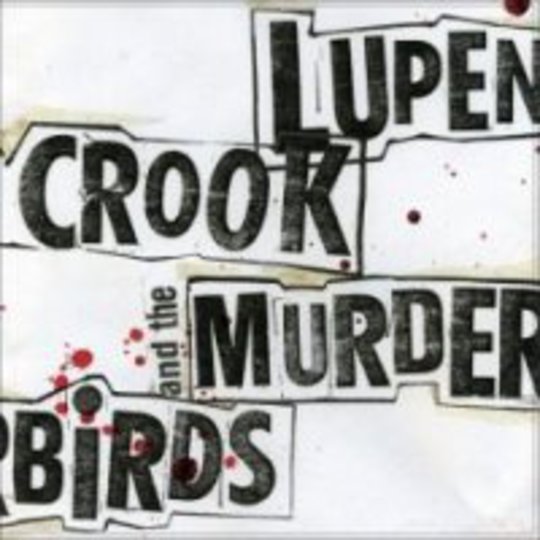 Lupen Crook (otherwise known as Matthew Pritchard) emerged back in the summer of 2006 with debut album Accidents Occur Whilst Sleeping. Described by its architect as “a record of the imagination” (begging the question: what isn’t?), it was by no means a summertime listen – more a boisterous trawl through a sordid, wintry underworld. Glimpses of real promise could be found among its 14 tracks – Pritchard assimilating myriad influences and shaping them into something unique though arguably never wholly realised.

His second offering Iscariot The Ladder weighs in at a lean 28 minutes, presumably eager to build upon the possibilities explored on aforementioned debut. Fans of said record certainly won’t be disappointed, as what Pritchard and his Murderbirds (now given prominent billing) cook up here is very much more of the same – a theatrical miasma that lacerates and engages without truly taking off, hindered by the very elements that combine to make it such an intriguing proposition in the first place.

Evidence that Iscariot isn’t going to be an easy listen is everywhere, from the blood-splattered artwork through the title itself (ultimate betrayal, anyone?). Certainly, opening track ‘Cackle And The Crown’ is indicative of the album as a whole. Initially a gentle finger-picked lament that finds our man ruminating humiliations past, the Murderbirds soon make their presence known by way of a chugging, decidedly un-pretty guitar riff. This bolsters the song towards the sort of unhinged climax so many on this album culminate in, a venomous Pritchard condemning “middle class Christians with filth on their minds” _before the desperate, repeated refrain of _“there’s fire in the hall and all the kids are screaming”. Nice.

Elsewhere, the album continues to play like some kind of gypsy-punk-folk-skronk hybrid, Pritchard’s voice steering these songs in a manner sure to divide listeners’ opinion. Equal parts bitter, shrill and disillusioned, it harnesses the oppressive and bleak outlook of his lyrics, and much like these comes sometimes across as a bit of a whine. He clearly relishes embracing the seamy, darker side of human nature, though occasionally struggles to imbue the songs with the true sense of decadence striven for – the album, for instance, was recorded in the basement of a former brothel. Haughty posturing or genuine artistic statement? Possibly, thinks this reviewer, a bit of both.

Throwing too many ideas at its songs proves Iscariot’s major downfall. Pritchard’s schizophrenic song-craft is ultimately effusive, while the Murderbirds’ tendency towards bombast grates even over the relatively brief ten tracks. Which isn’t to say they don’t occasionally hit the nail on the head – ‘Young Love’, for example, is a skiffle-pop gem, strong of melody and restrained in execution, while ‘The Critic’ notably channels the collective strengths of its players into a concise and enjoyable vaudeville stomp.

But a few scattered highlights do not a great album make. Were it a debut collection it would undoubtedly make a greater impact, but the lack of progression since Accidents weighs heavy throughout. A misfire more than a calamity then, and worthy enough to warrant keeping an eye out for more Murderbirds on the horizon.