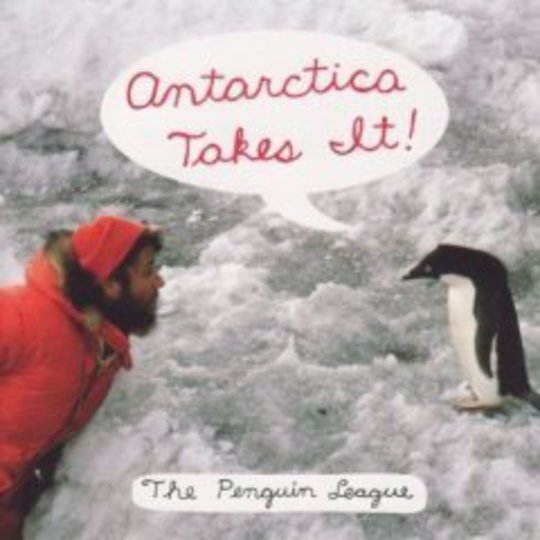 Few acts sketch a line between love and hate quite as finely as Belle & Sebastian. For some, the quaint Glaswegian twee-troupe are vanguards of ambrosial, bookworm-riddled melodies; the kind of band that reciprocates the embrace of it’s corduroy-clad following with a warm, paternal hug and a piping hot cup of whipped-cream topped cocoa. Yet for others, Stuart Murdoch and his sickly-sweet compadres amount to little more than church-attending bedwetters with a nauseating penchant for passionless, florally-designed jingle-jangling. There’s little scope for middle ground: it’s either resolute adulation or inherent loathing.

Following the proper release of debut long-player The Penguin Line, Santa Cruz-dwelling quartet Antarctica Takes It! will invariably accentuate the fissure between such uncompromising bipolarity. Bursting seams with a clutter of rink-a-dink rhythms and cosy fireside strumming, it’s a Litmus test that subconsciously plots positions on the musical stratosphere; an unassuming aural barometer of the cute and the curt; or, to put it coarsely, a record that will turn you on or turn you limper than Fred Durst’s biscuits.

By gleefully enduring the entirety of this excursion into indie-pop’s enchanting realms you’ve bought yourself a handmade (of course) ticket to a dreamland where I’m From Barcelona and Camera Obscura skip, giggle and make merry in dew-soaked pastures. But if gnashers are found grinding the moment frontman Drew McKeever unconvincingly declares “I’m not a lover, I'm a fighter” over tin-pot opener ‘I’m No Lover’’s frisky mariachi sway then the proceeding thirty minutes will ensure a few straw-ingested meals and a trip to the orthodontist wont be too far away.

Make no mistake, Antarctica Takes It! have little desire to alter perceptions – ‘Flightless Birds’’ perky, mandolin-infused tropicalia appeals only to the most fey of souls – but underneath the innately childish charm and marshmallow toasting exterior lurks an ear for intricate melody. The sheer scale of tracks like the delightfully twinkle-toed ‘Circuits’ and equally acrobatic ‘The Song Is You’ stupefies enough to bypass dismissive thoughts of vanilla-coated feebleness. A kaleidoscopic jamboree of jaunty guitar, brushing percussion and proud, protruding horns, each track pours the lemon-fresh zest of summer into frost-bitten hearts like a gushing waterfall of optimism.

Of course, this relentless swathe of tweeish jubilance can grate on even the most optimistic of lugholes and when incredulously dizzy sing-a-long ‘My Friend Sam Saarni’ flutters it’s wings the result is so painfully sappy it makes Tilly & The Wall seem like boisterous playground bullies. Yet the cascading furore of instrumentation emanating from penultimate track ‘Antarctica’ sheers away this woollen lull as it's bristling up-tempo saunter supersedes the hushed introduction with a giddy, harmonic alignment of both verve and vigour that belies the group's initially coy demeanour.

Sound familiar? Well, much like the inaugural offering of a certain Scottish ensemble, The Penguin Line may be a record to cherish in years to come – it just depends on which side of the divide you choose to stand.