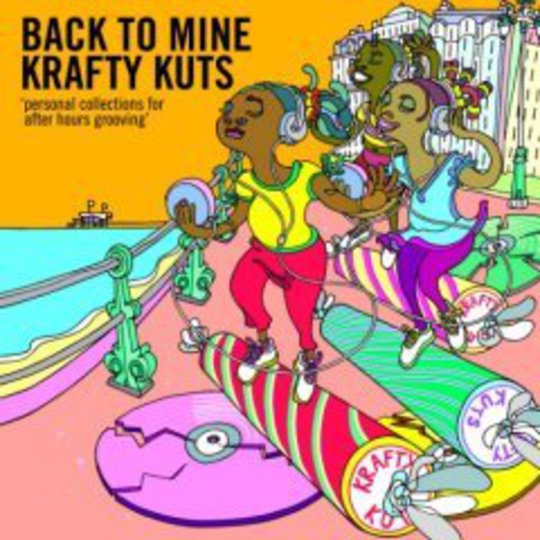 The Back To Mine series has always proved to be a bit of a mixed bag; after all, seeing as it’s subtitled “Personal collections for after hours grooving” there’s always going to be something of the laid-back about it and, indeed, however hectic Krafty Kuts aka Martin Reeves’ personal collection gets (tripping over its funky basslines into a short interlude of hip-hop) it never quite lets itself go in one particular direction. While the electro-tinged tracks prove to be something of an oddity it becomes abundantly clear that Reeves is not only most comfortable when dealing with the breaksier side of chill-out, but he’s far more spot-on when it comes to his selections.

First, the good news. And, thankfully, there’s much to praise on this rather expansive compilation. The soulful, languid beats of the Sharpshooters’ ‘Pork Pie Stride’ are the perfect opener, mixing a gliding trumpet with a deep bassline that, while pretty standard as far as commercial soul goes, nonetheless functions as a warm bed from which the compilation can launch itself. As it feeds into Massive Attack’s ‘Any Love’ the beats get louder as the vocals get even more soulful, but it feels slightly too under-paced. The crisp drums sound like they’re just waiting for the opportunity to get even bigger and with the arrival of the Pete Rock & CL Smooth’s ‘TROY’ and the Incredible Bongo Band’s ‘In A Gadda Da Vada’ the beats start breaking exactly as they’d been threatening to. ‘In A Gadda Da Vada’ makes an appearance on its own rather as the backing to Nas’ ‘Hip-Hop Is Dead’ and, seeing as how prevalent it’s become in the last year only hints that slightly more upbeat hip-hop would have ushered the compilation up a couple of notches.

As it is, it only serves to signal the move into a bit of electro, which leads into another tiny taste of hip-hop (an actual Nas track this time, the underwhelming but still-pretty-good ‘Nas Is Like’) before we’re back into some slightly more straightforward funk. And that’s the main problem with this particular Back To Mine – by trying to flit between so many genres it only ends up feeling somewhat insubstantial; jack of trades but master of none, if you will. While Guillemots’ collection delighted precisely because it was so scattered and all over the place (Sonic Youth, Buffalo Springfield and Kenickie on one CD? Winner) and, say, Mercury Rev’s effort sounded like a mainline directly into Jonathon Donahue’s swirling brain (and had no difficulty in recreating the feeling that he was playing you some tunes during 3am sofa session after a hefty night out), by attempting to squash so many styles onto one compilation Reeves isn’t doing himself justice.

You get the feeling that, had he concentrated on the casual breaks at the beginning of the album, this Back To Mine could have been a deliciously chilled addition to the canon. As it is, it feels more like a mini-set but is handicapped by its length so can’t really create enough of a mood. It’s almost like a sampler of a Krafty Kuts set and, although there are certainly worse ways to spend an hour, it’s not the hazy Back To Mine chillfest it could have been.