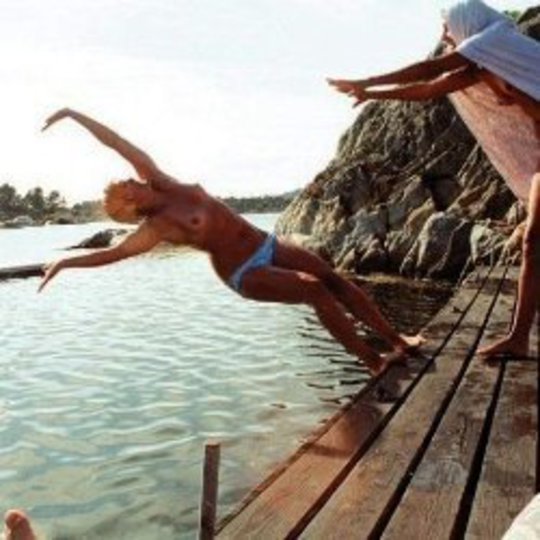 It feels like we’ve been listening to this album forever, desperately trying to find some kind of thread to cling onto. We’ve failed. Miserably. And that’s because, while Throw Me The Statue’s debut album is mostly “downbeat” and “lo-fi”, there seems very little that sticks from song to song. There’s plenty of acoustic guitar and mumbled vocals, but there’s also almost a full orchestra of other instruments and randomised beats hiding in the background, taking it in turns to pop through the velvet curtain for a brief appearance before sneaking off again.

Aha! So that’ll be the charm of it then. Won’t it? Well, yes and no. Moonbeams is at times utterly spellbinding and brilliant, but it can also be a shade confused, peppered with passages that aim to stretch the envelope or create atmosphere but merely induce lethargy. You see, a song such as opener ‘Young Sensualists’ does all the right things, all in one go - a mesmerising beat; a delicate, transporting vocal melody; some hazy Postal Service warmth. But then ‘Lolita’ and ‘A Mutinous Dream’ try to up the ante, and Scott Reitherman’s vocal can’t keep up, especially on the latter, which sounds like it’s trying to fall apart… until it does, and a synth appears to pick up the pieces.

But then - oh, but then - ‘Your Girlfriend’s Car’ is a superb song that references Pavement, Reuben’s Accomplice and Eels as it bobs along joyfully. And this is when Reitherman’s voice comes into its own: when he’s not fighting; when he pulls back and speak-sings; when the melody is simple and striking. It is in these moments (see also: ‘About To Walk’, ‘Groundswell’ and ‘Written In Heart Signs, Faintly’) that the touch of co-producer Casey Foubert (Sufjan Stevens, Pedro The Lion) seems most evident, and when Moonbeams rises to meet the listener.

You have to plough through ‘Conquering Kids’ and ‘Yucatan Gold’ to get to these golden nuggets, though, and while both of these songs start well, they crumble, hinting at a deep talent but failing to realise it. Moonbeams is therefore an infuriating listen: an album that shimmers one minute and lurches off into the shadows the next. It jumps about too much and tries to show off, when restraint and subtlety were generating such rich rewards.