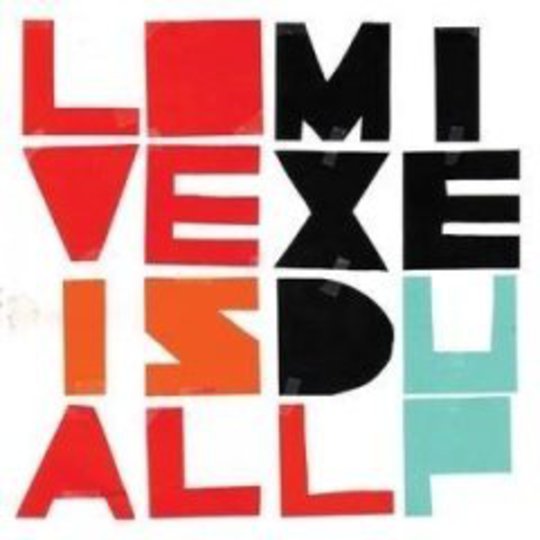 Remix albums, eh? A cynic might question their validity as an art form – certainly, by their very nature they offer a different experience to an album. Cohesion and flow, for example, must be sacrificed. Right? The name of the game here is to utilise and alter the key points of someone else’s toil, creating something that both complements and expands upon said original: a vision of their work that may well sound completely different though in some way remains faithful. That, or they’re just a way for musicians to have a whole lot of fun with someone else’s work the jump-off point…

Happily, Mixed Up is indeed a whole lot of fun. Love Is All emerged from Sweden’s rich musical scene in 2006 with debut album Nine Times That Same Song, a delirious rush of inventive, noisy pop, Josephine Olausson’s exuberant vocals offset with added sax appeal courtesy of Fredrik Eriksson. Its reappearance some two years later in new threads is welcome then, as are its talented cast of performers. Hot Chip, for example, are seemingly incapable of putting a foot wrong at the moment, on the eve of unleashing their most accomplished album to date. Their take on ‘Felt Tip’ concludes this set in a poised, graceful manner – warm, enveloping, and at a relatively spry four minutes in no danger of overstaying its welcome.

‘Felt Tip’ in fact bookends the album, frYars kicking off with a skittering, upbeat translation of the song that takes the edge off Olausson’s vocals by interspersing them with his own deep burr. Perhaps the strongest Love Is All original, it also yields two of the most rewarding mixes. In demand electronica artistes Metronomy are up next, with a thoroughly decent re-working of ‘Spinning And Scratching’, all staccato bass and stabs of synth forming a worthy backdrop for the frenzied yelps of “Entertainment! Satisfaction!” that permeate the track. It’s even got time for a skronked-out sax solo, and possesses an indeterminable, agreeable sexiness throughout.

Quality dips a little three tracks in with Optimo (Espacio)’s rendering of ‘Busy Doing Nothing’: a thumping, bass-heavy house workout that recycles numerous aspects of the original but rather fails to go anywhere new or exciting, while The Bees’ version of ‘Make Out Fall Out Make Up’ somewhat predictably plays heavy on Love Is All’s brass inflection but doesn’t really run with it; in fact, all it does is add some shuffling drums and Hammond before speeding it up towards the end. No thanks, Bees! Next!

Ah, Maps. Purveyor of glistening, dreamy pop, James Chapman imprints exactly the kind of glacial, vast swathes of sound you might expect onto ‘Turn The Radio Off’, and very pretty it is too. The Tapedeck remix of ‘Busy Doing Nothing’ is mighty enjoyable also, splicing up jolts of guitar most pleasurably. Bridging the gap between here and Hot Chip’s winding up proceedings are Mixed Up’s two longest cuts – a Chicken Lips ‘malfunction’ ‘Make Out Fall Out Make Up’ purpose-built for decibel-chomping stereo apparatus and Studio’s remake of ‘Turn The Radio Off’ – a minimalist, LCD Soundsystem-esque swagger that clocks in at a leisurely ten minutes.

A fine conflation it is: respectful, for the most part absorbing, and in contradiction of a suggestion made at the start of this review, not without an admirable sense of consistency.

Sun In My Pocket EP