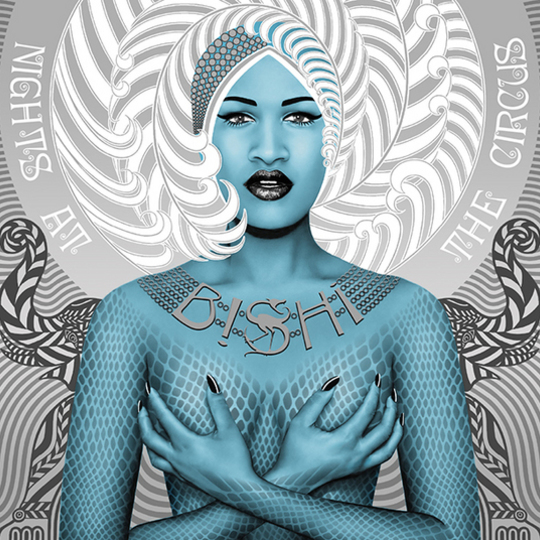 My first encounter with Bishi was around five years ago, on a boat. From what I'd heard of (club night) Kashpoint, it played the best mix - a melodically savvy brand of electro which eschewed at least some of the Shoreditch clichés of the time, pairing it with some darker gothy elements and drum 'n' bass. As a putative and slightly naive music geek I was just starting to get hooked on electronic music, and so overcame trepidation about dress codes, London scenesters and other bogey-men, and persuaded a friend to accompany me into the metropolis.

The night was a good one, if a little intimidating - we watched Bishi, as DJ and electro cabaret performer, hold court to an extravagantly dressed crowd. I walked away with mixed opinions on her music, though - while a strong talent shone out above many of her electro contemporaries, I found her too stylistically tied to a fashion-focused scene and her sound ultimately left me a little cold. And so it wasn't until recently, on hearing her new album and seeing her face emblazoned across the pillars of a church on my way to work, that my attention was drawn back.

And how much has changed since: Bishi's music has broken free from those fashionable electro shackles, taking on an eclectic yet complimentary set of world-wide influences. A twist, too: we're here at St. Leonard's in Shoreditch to hear the entirety of the new record performed live - and stripped bare in a church it shines with an incredible degree of musical depth.

What's the music like? Well, her band features musicians and instruments from a variety of traditions - most notably the sitar and tabla of Indian classical, and the vocal styles and modal scales of English folk music, which appear to merge effortlessly with Indian ragas. There's a smattering of Eastern European folk influence too, with a Jaw Harp on stage throughout, and the church organ and bell itself add their rich, muddy, harmonic weight to the chillingly successful first track of the night - one which I hope was recorded live.

The ecclesiastical venue, as it turns out, is ideal for the new material. Myself an atheist surrounded by candles and mulled wine, I'll grant that the designers of churches really knew what they were doing. The building creates an ambience and an acoustic which really brings out richness, depth and intensity in vocal music - something spiritual for the earthier side of music to bite into and cause sparks - something which cast Bishi in a new light for me and I hope others.

What stops the music, though, from turning into the worthy and slightly forced 'world music' eclecticism which the sceptical might fear? It has some great pop hooks to it - and Bishi's strong and interesting voice, stage presence, wardrobe and electro sensibilities tie it all together in just the right way. Trust me, it works. Ultimately it's an album of folk songs - but simultaneously far more modern and inventive, far older and more deeply-rooted, than any of her folk contemporaries. More specially, it really feels rooted in every part of East London's community, past and present; the bells of Shoreditch, after all these years, have grown rich.