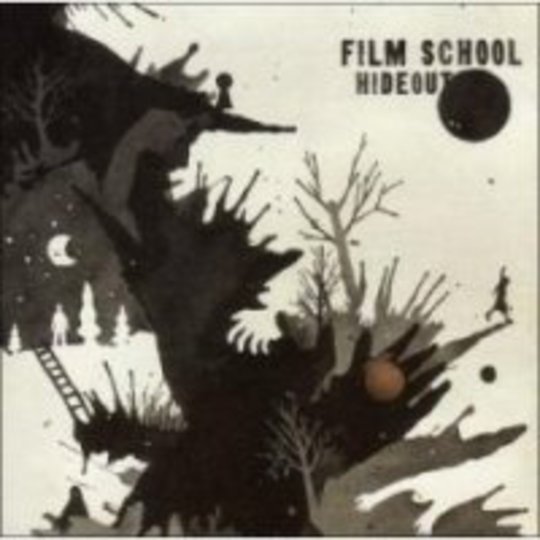 Missing the days of the pre-grunge early ‘90s? Don’t fret, because with war in Iraq, the US economy in a tailspin and My Bloody Valentine playing gigs again, it’s like they never went away.

Turbulent times these certainly are, so it’s no wonder that bands likes Asobi Seksu, Maps and Blonde Redhead with their latest, are once again escaping into the wall of guitars, reverb and dreamy vocals that came to be known as shoegaze. Though standing on the critical ramparts and announcing the start of a full-on revival would be a case of lazy journalism. After all, it’s a sound that never really went away. The Radio Department, M83 and Caribou for example have incorporated elements of it into their work for years now.

This brings us to Film School. A Los Angles band wading right into the shoegazing deep-end with_ Hideout_, their second release on Beggars Banquet. The brainchild of frontman Greg Bertens, it’s a record that attempts to align the atmospherics of Kevin Shields with the post-punk flavoured elements of the Jesus and Mary Chain’s rhythm section.

A moment like the absurdly named ‘Sick Hipster Nursed By Suicide Girl’ constructs itself around the driving beats and introspective vocals one would expect, with every stylistic trick being used to create the desired dreamy effect. It’s a formula that repeats itself to varying degrees of success throughout the entire album.

Respite from the band’s occasionally constricting vision of shoegaze only appears on highlights like ‘Florida’. Moroder-esque synths lead the charge before interweaving themselves into Berten’s and bass player Lorelei Plotczky’s breathy vocals. It’s a standout moment on a collection of songs that suffer from an otherwise over-arching similarity.

As you may have guessed by now, Hideout is another one of those highly competent yet less than inspiring products. Boxes are ticked and motions are expertly gone through, but the greats of the genre offered up an immersive experience capable of heavily engaging the listener from start to finish. Hideout, on the other hand, just blends into the background, only occasionally giving us reason to pause and take note of what’s coming out of the speakers.