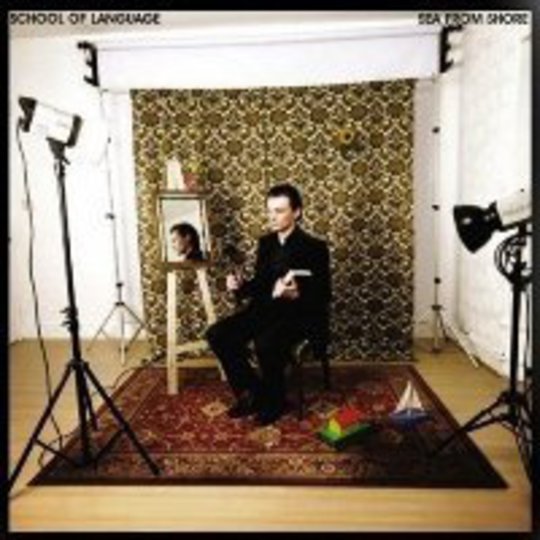 While their contemporaries Maximo Park and The Futureheads were enjoying the fruits of NME-adoration, Field Music, David Brewis’ previous incarnation, seemed to float too far under the radar to achieve their rightful acclaim. But some of the greatest music isn’t for the ears of the masses, and without the aid of his former bandmates as School Of Language, Brewis’s newest project boldly continues in the same experimental, engaging vein.

Sea From Shore sees the Sunderland boy locking himself away and drawing out all those sounds that haunt him in dreams. The running coda of the album is the ‘Rockist’ quartet of tracks, which isn’t as pretentious as it may sound. ‘Rockist Part 1’ tumbles out with looped vocals which take a Carol Vorderman approach to affairs in that the spine of the song is a flurry of vowel sounds. Rather than grating on the ear, the layers of Brewis’ vocals create an intimacy as the main vocal line finds him tunnelling through painful conversations and memories. Running straight into ‘Rockist Part 2’, you can feel Brewis confidently sinking into the flow of the album. He may have constructed the track by frantically cutting and pasting sounds – running back and forth between guitar and laptop – but a sensation of perfect calm descends with a cinematically deep piano reminiscent of Aim’s more uplifting moments.

Brewis’ trick of placing discontented, frustrated lyrics over serene melodies works best on the slow march of ‘Keep Your Water’ and the contemplative ‘Ships’. Although he has handled the majority of instrumentation, the compositions don’t sound as though he’s been overwhelmed by the task in hand. Instead, it’s easy to imagine plenty of enjoyment was had when inventing the thick walls of guitar that colour ‘This Is No Fun’ or during the writing of the staccato drum part for ‘Ships’. Even when old mate, The Futureheads’ Barry Hyde, makes an appearance on ‘Disappointment ‘99’, he’s there to do exactly what Brewis needs which is add a hint of glam rock with a fantastic falsetto.

By the time the concluding ‘Rockist Part 4’ kicks in with sparse guitar and steady drums, it’s unclear whether this journey has helped Brewis work out his demons. However, there’s an optimism in the raised pace and his realisation that he is, for better or worse, tied to his lover.