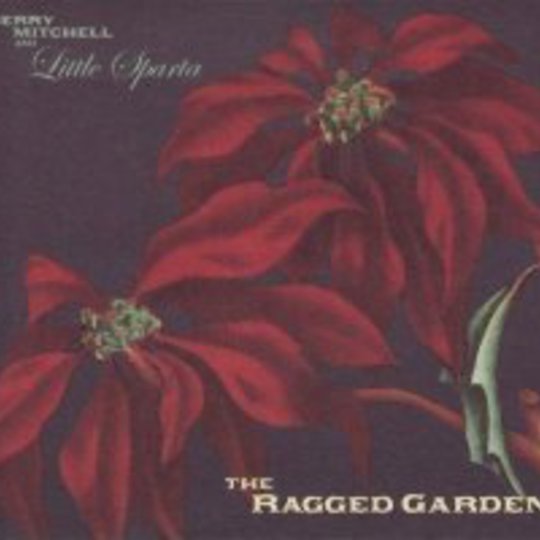 It’s fair to say the Scottish Tourist Board won’t be employing Gerry Mitchell as an honorary ambassador anytime soon. The Glaswegian poet’s pensive laconic growl does little to abnegate the portrait of a gloom-laden, penny-pinching country that’s pervaded since Calvinism tightened its miserly grip in the 16th Century. But in the abject utterances of this stony-jawed bard lies the true essence of a nation ridden with apathy, cynicism and brazen self-deprecation. Forget Leon’s boy-next-door jizz-pop charms or Marty’s back–from-the-smack chipperness: Gerry Mitchell is the epitome of Scotland today.

On new long-player The Ragged Garden Mitchell contorts his homeland’s multifarious complexities into a breathtaking agglomeration of monosyllabic dialogue accompanied and emboldened by the withered melodies of tender London-based outfit Little Sparta. Primarily a spoken-word affair, it’s a record far removed from the grotty, sleaze-incrusted asides of Arab Strap; instead, it prefers to explore deep-seated emotional fissures amidst a rustle of lilting, creaky canticles that bear more than a passing resemblance to the autumnal instrumentation and darkened atmospherics of Dirty Three.

The dour, creeping strums of opener ‘Murder Mystery’ sets the tone for an album riddled with melancholy as Mitchell’s terse vocal scythe bears down on the track’s whimsical folk sway. But it’s in the sound of last year’s magnificent single ‘Feasting On My Heart’ where The Ragged Garden ignites into its full candle-burnt splendour with Mitchell’s brawling projection scavenging through a haze of viola and percussion like a rapacious vulture toying with its prey. Cold of heart and earthy of soil, it’s a chilling arrangement infused with an overwhelming disdain that shivers the spine like the icy glance of a cold-hearted barbarian, lips dripping fresh with the blood of conquests past.

Much of the record retains this merciless disposition, with reticent tracks like ‘Shell Of Night’ blowing cruel glacial vignettes over barren guitar flickers as threadbare as the Scottish Highlands after the clearances of the 1700s. It would be unjust to ascribe The Ragged Garden’s virtues solely to Mitchell’s coarse whisky doused utterances – instrumental offerings like the mandolin-ridden waltz of ‘Journey Through The Night’ stand tall as unaccompanied, heart-wrenching laments – yet there’s little doubting his succinct lyrical acumen and bar-propping delivery transforms the blithe folksy arrangements of ‘Love Makes A Noose’ and ‘Aerial Drone’ into staunch, tough-skinned brutes that demand every modicum of the listener’s attention.

But amidst this retrospective sprawl of morbid contemplation the fragile, tenderised plucks of ‘Stale Intrigues’ protrude like a glistening beacon of hope. Burrowing itself within a weeping hovel of glockenspiel chimes and wailing violin, Mitchell’s tear-stained brogue gracefully captures the cruelty of circumstance where we “lose each other in the revolving doors of life’s department store”. An immaculate, brittle psalm etched with brooding poignancy, it drills through heart-shells and caresses soul-strings to the tune of virtuous, quivering beauty tinged with bittersweet sorrow.

Piously bleak and inherently pessimistic, _The Ragged Garden _is an exquisitely crafted example of Scotland today and in the lachrymose wordsmithery of Gerry Mitchell us Scots may have found ourselves a voice to believe in for 2008.

The Battle Of Land And Sea

The Battle of Land and Sea