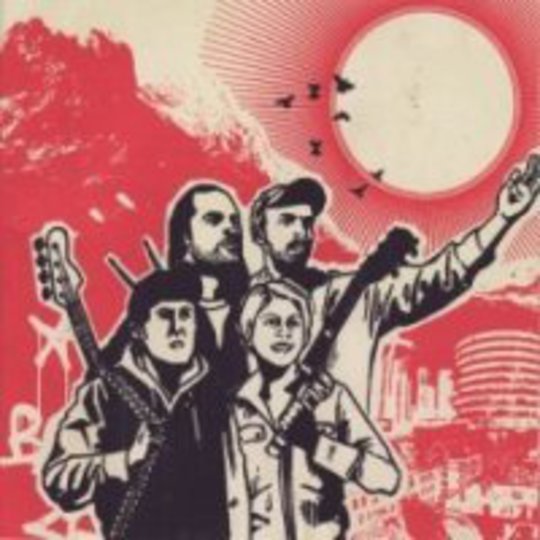 If you’d heard Manchester’s Sonic Boom Six in 2004 you could easily have written them off as some weird hybrid of bubblegum punk, party hip-hop and knees-up ska, and many did. Crucially, many more didn’t and so the relatively limited number of people who have been exposed to them over the last three or four years has grown gradually, allowing them to release a number of EPs and their first album, The Ruff Guide To Genre Terrorism (can you imagine any mainstream-courting band releasing a record with that title in the endless hysteria whipped up by post-9/11 sloganeering?), was a truly startling collection of songs. It whipped around the musical world without a care for convention; where they used to hide Beenie Man ragga riffs next to direct QOTSA lifts, Maytals samples nestling alongside Refused-style rhythmic mash-ups. It was exciting and vital in exactly the same way so much supposedly non-commercial music wasn’t at the time. It was politically aware without being preachy and was the sound of a young, multicultural England without having a badge saying_ “I read The Guardian and watch Channel 4, check me out” _on it.

And now it’s time for them to go over the top with Arcade Perfect. It’s a more coherent and polished body of songs, and so it doesn’t flit around genre-wise as much as its predecessor. While some songs are more hip-hop orientated than others (notably ’Tell Me Something I Don’t Know’) the album flows a lot more consistently and accessibly than Ruff Guide…. The opening title track is all stuttering, punchy rhythms and thick, rich guitars that manage to sound both glisteningly clean and massively filthy at the same time – within about nine seconds of the song kicking in producer-supreme Pete Miles’ talent is roundly confirmed. This sounds astonishing, not simply because it’s a well-produced punk record but because it is utterly unique. When they drop in deep dub bass on ‘Ya Basta’ or the languid reggae swoon of ‘Flower’ it doesn’t seem to jar from the heavier, more up-beat songs such as ‘Meanwhile Back In The Real World’ or the clear standout ‘The Strange Tale Of Sid The Strangler’, both launched into the stratosphere by Ben Childs’ guitar. The latter track is a contender for the best song SB6 have ever written because the lyrical narrative is combined to the seemingly boundless energy of the music seamlessly while vocalist Laila Khan’s feral growl dissolves into a sugary purr and back again in the blink of an eye to disarming effect, underpinning Neil McMinn’s thunderous drumming and giving a real edge to proceedings. The message is clear: they don’t need to shoe-horn their influences into verses and choruses any more, because now they’re finally able to produce music in which every riff is informed by myriad styles and still create a coherent, catchy album.

It’s arguable that Arcade Perfect is the most pertinent document yet of what it’s like growing up in a multicultural metropolis in the 21st Century. From personal dilemmas over whether ignorance is bliss when it comes to facing up to the casual racism of many of this country’s inhabitants (‘How I Wish I Could Smile’) and the creeping tide of insidious politicians gradually eroding personal freedoms (‘While You Were Sleeping’) to a simple belter about going out (‘For 12 Weeks, The City Is Theirs’), SB6 have purposely attempted to look externally at the world rather than making an insular, exclusive album. Extrapolating it even further, it’s not that great a leap to say that if The Clash had been formed amid the chemical warehouse parties and dirty punk gigs of Manchester in the 2000s they could easily have made an album like this.

But even if you’re not into the social commentary – fair enough – Arcade Perfect stands up incredibly strongly as an album full of brilliantly energetic (even at different paces) songs.‘Flower’ lopes along, fuelled by Paul Barnes’ fat bassline and is the most reggae-heavy piece of music they’ve made since the now-classic ‘Northern Skies’ and ‘Ya Basta’ is a glorious cultural cluster-fuck of a tune. Bursting with guest verses from Itch from The King Blues, the inimitable Babar Luck and Johnny from The Filaments, its vicious dub is a million miles away from anything you’d conceivably expect on a modern ‘punk’ album and is all the richer for it. SB6 are by no means the first band to try and combine so many disparate genres but they’re definitely the most proficient at it today. Just check out ‘Sound Of A Revolution’: it’s a brilliantly schizophrenic jaunt through at least four different musical styles without having to either pause for breath or feeling stitched together.

And the blistering punk riots that made their name are present and correct, naturally. Even though ‘September To May’ is perhaps the most deliciously polished song they’ve ever recorded, it’s radio-friendly not because it’s been watered-down but because they’ve finally written the stadium-destroying chorus they always threatened to. It’s a song that revels in its status as a rival to anything the current crop of mega-selling haircuts can produce because it affirms what we all knew all along: pop doesn’t inherently suck, only bad pop sucks.

So it won’t come as a surprise that Arcade Perfect is one of, if not the, best albums of the year. In a world where bands are judged solely on the proficiency of their songwriting, the ferocity and brilliance of their live shows, whether their songs can stand up to a deep deconstruction as well as being justifiably called anthems that could be dropped in any club that features people having a dance and the honesty of those making the music, SB6 would have been collectively knighted for services to culture by now. The fact is that they represent something the Moosik Indusstree has been seeking out for years, a focussed blast of melody with a backbone of unimpeachable integrity, and they’re utterly vital.