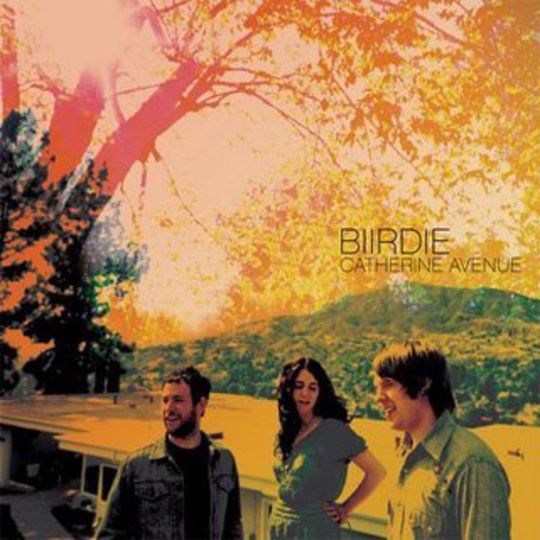 Nice guys finish last, so goes the popular cliché, and on the surface of it Biirdie make nice music that could so easily slip past unnoticed. But persevere because there's plenty on Catherine Avenue that warrants praise, it's just well hidden. Tucked away like a chick under its mother hen's wing... or something.

And to employ another cliché (what would us journos do without them?), variety truly is the spice of life. The LA trio run through a variety of styles and moods here, often over the course of the same song, and keep the interest from waning pretty successfully.

The title track that kicks off the album sounds like a long-lost Cassadaga B-side, and Texas Tornados cover 'Who Were You Thinking Of' continues the theme of misanthropy. "Who were you thinking of / When I was making love to you?" asks singer Jared Flamm over a bouncy Farfisa motif and country(ish) vibe.

Indeed, Biirdie tend towards the epic in places and 'Estelle' isn't even the most lengthy cut on Catherine Avenue. No, that honour belongs to 'Careless & Unconcerned', a slow burning acoustic-led expedition into Fleetwood Mac territory. But come back! There are echoes of Grandaddy, too.

Elsewhere, 'Petals' is the record's tear jerking moment, a folksy lament sung by co-vocalist Kala Savage, and she combines well with Flamm to make 'Life In A Box' and 'LA Is Mars' sound like the most cotton-wool wrapped of Viva Voce numbers.

Despite the myriad influences and well-worn song structures, Biirdie do this kind of thing at least as well as many of their more celebrated contemporaries. It's never going to be the kind of record to set your heart on fire, but for those cold winter nights spent drinking tea and generally mooching around, Catherine Avenue _is just, well, _nice...