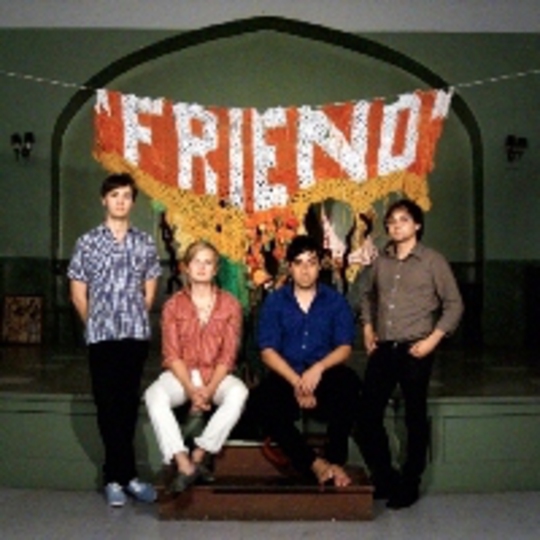 One of the more unusual releases of the year so far as constituent parts go, Friend is an eleven-track EP from Brooklyn’s Grizzly Bear which mixes original material with a selection of covers. That’s covers by other acts, on this Grizzly Bear release; covers by Atlas Sound, Band of Horses and CSS. Keeping up? Good, good.

Essentially the closure necessary for the four-piece to move onwards and create the follow-up to 2006’s seminal Yellow House _LP, _Friend collects re-recorded versions of a pair of (debut album) Horn of Plenty songs – ‘Alligator’, which features both Dirty Projectors and Beirut’s Zach Condon, and an extended and entirely re-worked _‘Shift’ – alongside ‘Granny Diner’, originally released as a bonus track in Japan, and brand new track ‘Deep Blue Sea’, which is performed acoustic and solo by the band’s Daniel Rossen. The mixture of approaches – the first four songs here were recorded in a church, and subsequently sound very different to the home-taped Rossen number – leads to a true lack of coherency, but this is acceptable given the nature of this release: a value-for-money fans compilation to tide the faithful over ‘til album three.

Of the cover versions, CSS’s take on ‘Knife’ is perhaps predictably the most left of established centre, the Brazilians’ trademark funk surfacing between gaps in squelching beats; Atlas Sound, a.k.a. Deerhunter’s Bradford Cox, lace the same source material in dreamy melancholia; while Band Of Horses’ rustic country and western-tinged tackling of ‘Plans’ is an unexpected delight.

A must-have a la its preceding full-length? Nope, but Friend is a stopgap for existing admirers of Grizzly Bear to truly cherish.