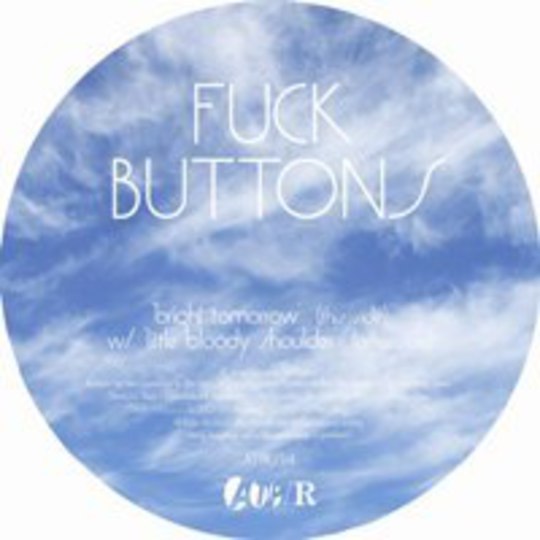 Inaccessibility’s so fucking right now right now, certainly in the DiS office. Every day our younger scribes assault older senses with blasts of avant-grind electro-static, dressed up as Real Proper Music. It’s tough, some days, to find some middle ground; a band that appeals to those demanding abrasiveness as easily as it does a soul seeking a semblance of peace and tranquillity. Fuck Buttons, though, just about fit the bill.

The London duo’s first release for the ATP label is a two-track picture disc (and download) well worth immediate investigation: pulsing and incessant thud-throbs come from all corners as ‘Bright Tomorrow’ evolves from sparkling beginnings glistening under a winter sun into some slavering beast of a soundscape, inhuman screams layered atop a fuzzing, slow-unfolding backdrop that retains its undulating spine of crisp computer heartbeats throughout. It’s beautiful and horrific, terrifying and calming.

Flipside ‘Little Bloody Shoulder’ follows a similar compositional path, albeit with rather fewer scares along the way; it’s undeniably the eye of the storm ahead of the arrival of the band’s debut album, Street Horrrsing, which will be available sometime ‘tween November and February (sources say different things). Whether a neat standalone effort like this can be developed into a long-player worthy of acclaim remains to be seen, but for the meantime Fuck Buttons walk the line between Wolf Eyes and an act like Nathan Fake, albeit a Nathan Fake with more _life, rather well.

And now: back to the noise.

Video: Fuck Buttons at Brixton Windmill
Log-in to rate this record out of 10
Share on
Love DiS? Become a Patron of the site here »