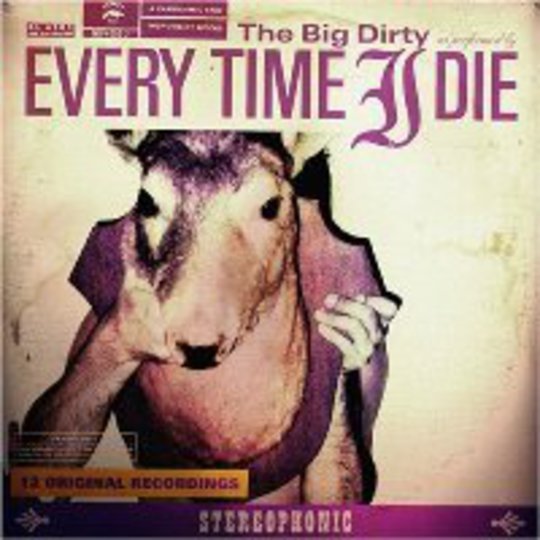 Whilst, to the uninitiated, Every Time I Die might just seem to be another generic emo/hardcore/whatever band, the reality is that over the past decade they’ve carved out a niche so unique that they’re already providing the musical inspiration for many fledgling acts.

With this, their fourth album, they blow a new hole in the side of the good ship metalcore. The Big Dirty is exactly what it says it is. It’s dirty, it’s big and it’s… the. This record could be everything you need from the aggressive side of the musical spectrum this year, next year, and for the foreseeable future.

While their first two offerings were raw and inspired and infused throughout with the glorious lyrics penned by word-magician Keith Buckley, they are worlds apart from the dynamism and intelligence found in both this and previous album Gutter Phenomenon.

While their third effort found a new direction, with Buckley’s vocals taking a more refined angle, it appears he didn’t manage to harness the full power of his new capabilities. So often on this record his rasping holler doesn’t seem to want to stop, and once you take the time to appreciate the stories he tells, appreciating the style he tells them in and the vital musical backdrop that he’s got backing him up, you won’t want him to stop either.

‘Rebel Without Applause’ has seconds where his gruff tones peel out your speakers with no respite and hollers aside, he sings every other word. It might not be what your mother calls ‘singing’, but how many things do you and your mother agree on? There are notes and accents just the same as the finest opera, but Buckley carries it all off with his gravely curse of a voice.

Musically speaking, ETID are undisputed kings of their genre. They’re kings that got tired of their land being populated by dullards and copycats, so they created a new country. Melding southern rock rhythms with furious metal and hardcore, they_ will_ groove your socks off, rock your bed knobs off, and scream your gobs off.

They’re prone to interestingly spazzy moments where you’ll immediately think_ Blood Brothers!, but soon after there will be a hip new breakdown to nod your head to and sway your aching hips with. Just like they added the respectively smooth and warbling sounds of Gerard Way and Daryl Palumbo to their last record, The Big Dirty _sees a cameo from the new flavour as Dallas Green lends his syrupy timbre to proceedings.

It fits beautifully. As does every other change in tempo and style on this album. You’ll struggle to find another record as beautifully balanced as this and, as we’ve seen with the English football team, it’s all about balance.

Just like Refused, ETID could well be one of those bands which bubbles under the surface for their whole career but is lauded and appreciated much more widely upon their demise.

Due to them being largely unappreciated during their musical lifetime everyone will claim to have seen them play some toilet or other on the release of their first EP back in the last century. It never happened.