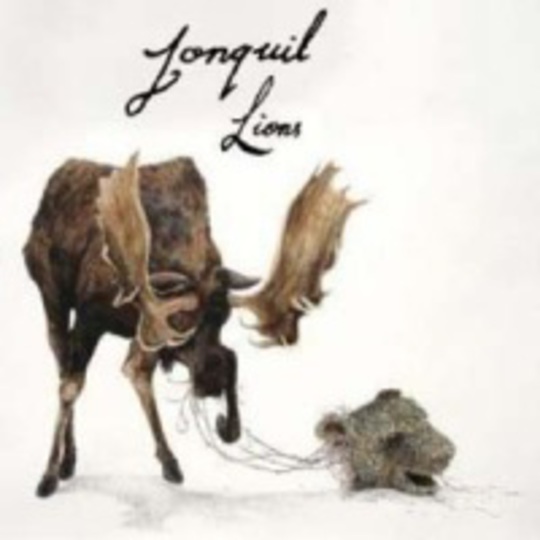 Jonquil are royalty around these parts (these parts being Oxford) and when they have a gig in town, it’s a bit of a given that anyone who knows anything about anything is going to be there – that is, if that anything about anything happens to be anything about music. It’s a sticky-damp summer night and we’re happy to be indoors. After a torture-like delay, vocalist/ multi-instrumentalist Hugo Manuel leads with a velvety wordless melody cycle that grows in volume and harmony as more band members join in each round. The sound takes flight like the succulent scent of a home-cooked meal, permeating the air with a bouquet of comforting aromas. Incredibly consuming, this bouquet of sounds is almost impossible to digest in its elysian prowess. I later learn that the track is ‘Lily’ and the album is Lions. Performances like these are proof of just how triumphantly Jonquil prolifically design and deliver a sound that fluidly translates from the studio to the stage – an enchanting gift that does not appear often enough. The strength of their sweeping bohemianism floods the senses to consistently bestow a lush listening experience.

When most pop screams NOW! Jonquil screams ANYTHING BUT NOW! Unlike most popular rackets disguised as bands that, more often than not and sometimes indirectly, represent the modern liquidation of the metropolis, the sounds of Lions are muted and smooth around the edges, as if caught in-between a mystical dream dimension and a keepsake treasure chest, overflowing with images of road trips and teeming, green country sides. Jonquil vanguard the panoptic, experimental pop that paints with the diverse hues of an antique tapestry – one that is bright to the eye, soft to the touch and heaven on the ear.

It’s a reflective and reverent sound that is humbly but heavily rooted in folk traditions with its multi-instrumental layers and thick harmonies. Lions takes flight without any trace of throwaway trends – instead it pays tribute to a modest musical model that keeps fresh with crispy samples and dexterous electronic transitions. It sounds incredibly seamless but, then again, is freckled with this unique, handmade quality – and the track flow is beautifully natural.

It’s affectionately smeared with recollection, but it’s a warm distance that doesn’t thoughtlessly sew melodies together. From the playful bass line of ‘Sudden Sun’, to the fairy-tale-like taint of the exultant ‘Lions’, to the windswept ‘Magdalen Bridge’ (which includes a celestial contribution from Youthmovies’ Andrew Mears), Jonquil offer descants for the dreamers and endlessly optimistic as Lions provides a magic that has the power to transform any cynic.