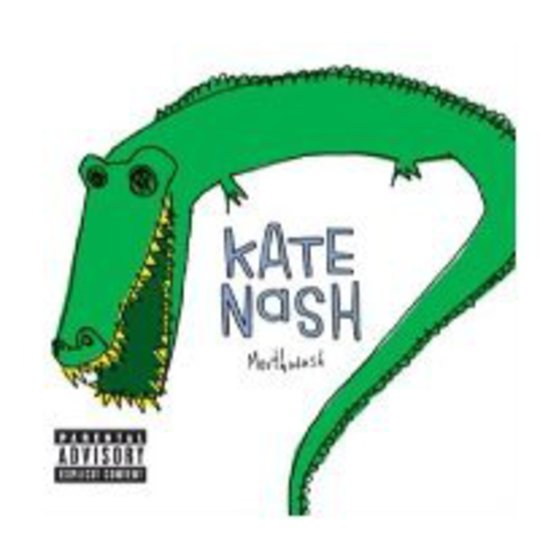 Kate Nash likes tea, cups of the stuff. She’s also pretty keen on her freckles – she’s a few of them, too. Me too as it happens – don’t see ‘em so much these days, as they’re sort of so obvious as to be oblivious, but when I choose to recognise the particulars of my face of a morning, bingo: freckles aplenty. Although quite what you care about this, I dunno; chances are you don’t, which leads me to…

Precisely the problem with ‘Mouthwash’: why do you care about what polite ‘n’ smiley Nash has to say about, y’know, the purely trivial things in her little life. After all, you’ve enough of these distractions, these little perks and pits of the everyday, to tide you over; you get up, clean your teeth, use mouthwash and floss, do stuff. I mean Allen, at least she had some lads kick the shit out of her cheating ex – that’s not something everyone does when their play-away lover turns the dirty cheek, is it? Nash? She’d probably write some poem about how sad she felt, and return to picking little bits of fluff from ‘tween her sparkly painted toes, and get on with sulking in that kinda sexy but not quite manner of hers; y’know, head tilted slightly, peering through her fringe, all normal and approachable and like you. Melancholy meets tea party chic, diary-sourced lyricism filtered through sacks of penny sweets: she’s singing “uh oh” to an audience wondering what she’s actually so moved by to necessitate this song, a genuine commitment of time and money. An audience wondering how simple it’d be to do likewise, dressing their inane prose up as an intellectual analogy for something entirely unconnected*.

I mean, this is perfectly pleasant - much more than can be said for a few other tracks cluttering up Nash’s imperfectly executed Made Of Bricks debut - but it doesn’t exactly mean anything. Anything. It’s lightweight, a freshly blown bubble of a song caught on a fleeting breeze; it’s honeycomb without a chocolate coating, half-realised and far from fulfilling. It is nice, acceptable, temporarily distracting, but hardly the work of someone repeatedly lauded as one of this year’s most accomplished new artists.

Maybe when Nash un-muddles that mixed up memory of hers she’ll realise the ability to pen truly arresting pop; there’s no doubt the girl knows her way around a half-decent tune or two, as ‘Mouthwash’ demonstrates, for all its lyrical so-what-ness. Right now, though, she’s in at the deep end with only the smallest of semi-inflated water wings to keep her afloat. The deep end of a skewed cuppa, tipping slowly towards a maw ready to consume and forget her.

* Says the lady herself: "’Mouthwash' _ is bit of a protest song that comes from the confusion of youth. I guess it's about not quite being there yet. About not feeling totally sure where you are going but still feeling the need to defend all the things that make you into who you are. We all have routines and things in common, that still somehow manage to be totally unique and personal to you."_