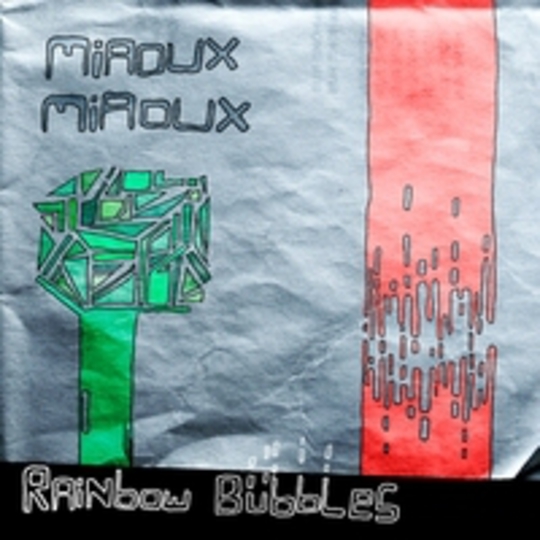 A slim-line version of weightier, more brutal electronic beasts of his homeland (Errors, Arab Strap), Julian Corrie's Miaoux Miaoux project is perfectly balanced by his attention to melody and its development. By championing this like a son returning from war, Rainbow Bubbles clambers above the realms of electronic trickery and nestles comfortably into a place close to the heart in which one can clearly hear the clang of invention and sheer excitement in equal measure. It's this reviewer's guess that an awful lot of people will overlook this release, deeming its rather generic dream-electro title a little too close to the shaggy hat-wearing end of the Warp catalogue, but these people need a shaggy hat ramming up their arses (and a copy of this record (not up the arse, just to own)).

With simplicity as his bedfellow, Corrie masterfully creates a dialogue between framework and elaboration. The opening quickie of 'The Colours Of Glass' is a fine example, introducing its theme early on and gently adding support to its accompaniment until the texture becomes thick enough to be considered truly satisfying. This, as a formula, doesn't sound too complex, does it? And who's to say that repeating formulas for a whole album doesn't work (goodbye 'independent music must innovate' credentials)? Sometimes it does, oddly enough, and this is one of the lucky happenings. There's a terrific amount of craftsmanship to Rainbow Bubbles, most of it emanating from this important balance of the known and the exploratory.

The complimentary/adversarial pairing of refrigerator buzz and childlike toy box on the record's title track makes for a satisfying enough experience, but Miaoux Miaoux shines brightest when pitting acoustic instruments against his worn half-Gameboy half-Aphex electronics. This happens quite a lot, which makes Rainbow Bubbles a very good album. While it’s not likely to break moulds and influence people, it should serve as a reminder that there is more to composition than the mere combination of sounds and the proliferation of phatness. Listen to the closing melancholia of 'Monochrome', with its rubato placing of very important chords to emphasise the intervallic progressions coupled with impeccable use of the tremelo effect, and you'll see. We're dealing with a musician in a technician's environment, with benefits immeasurable.