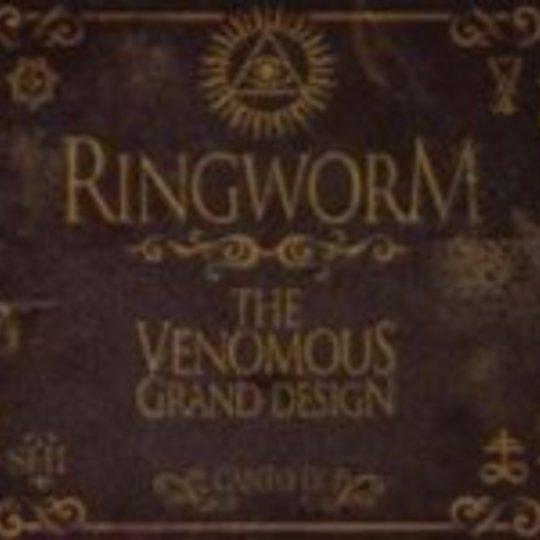 Few things strike as much fear into the heart as the phrase “ex-Terror/Hatebreed guitarist’s new band”. For the uninitiated, Terror and Hatebreed are two of the most astonishingly stupid bands ever to have existed – they make Fred Durst look like Werner Herzog. Their one-fingered riffs pepper a moronic strand of what can be an inclusive, inspiring and truly exciting genre, hardcore punk (not a shred of irony, by the way), and bastardise it into the realm of wifebeaters, “crucial beatdowns” and a curiously negligent approach to personal hygiene. So, it is with understandable trepidation that Ringworm’s third album is approached; hell, they’re named after a parasite that lives in your anus, so how good can it be?

Thankfully The Venomous Grand Design, although suffering from a serious case of Taking Itself Too Seriously, isn’t all that bad. ‘Alchemist’ and ‘Never Was’ are both hugely proficient metal-inflected punk songs, complete with coruscating solos that stay the right side of self-indulgent and are blessed with a real sense of energy and enthusiasm that colours the whole album. It’s not metalcore by any means, and its closest sonic cousin is probably Superjoint Ritual, one of Pantera vocalist Phil Anselmo’s side projects, such is its gruffness and hard-edged approach to riffing. Let’s just settle for calling it metal, shall we?

Having said that, The Venomous Grand Design is hardly the most forward-thinking of records. The acoustic intro to ‘Dichotomy’ feels like it’s been lifted wholesale from ‘Fight Fire With Fire’, and the thick riff that anchors the chorus is so head-noddingly good that thoughts of putting on a dirty white vest and calling all your friends “fags” starts to become appealing. And after about half of the songs on the album, the sheer unreconstructed density of the music starts to grate. The closest Ringworm might get to musical innovation is if you play this at half speed: then it could, conceivably, sound like a really shit Botch.

It’s music to listen to on the Tube if you’ve had a crappy day, but only until you realise that by doing so you’re slowly turning into one of those people that make gang signs with their hands while listening to Madball and think they’re being a bit badass and gangster. A guilty pleasure? Perhaps, but it’s not all that pleasurable after a while. Closer ‘Hell On Earth’ provides a welcome change of tone with about 20 seconds of melodic riffery, but that’s about it as far as goes. There’s zero attempt whatsoever to bring anything new to either metal or hardcore, and as such Ringworm fall flatly between the two genres. If you want the last brilliant metal album then go and buy Blood Mountain by Mastodon, and if you want the last brilliant hardcore album then just wait for the new A Wilhelm Scream album. This is superfluous, albeit sadly so.