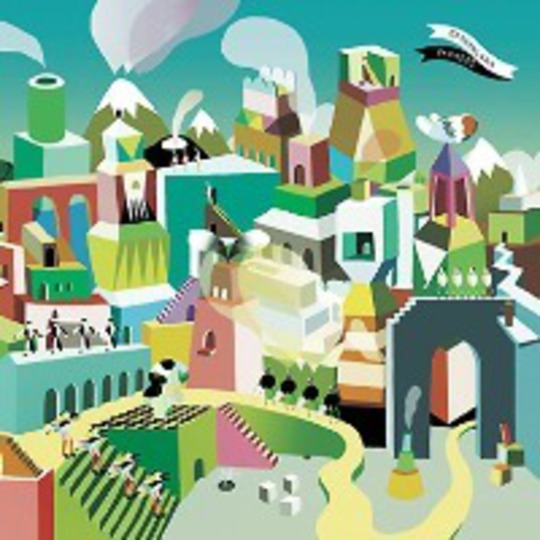 I’ll save you the scroll, and the stinging sensation that edges towards the centre of your eyeballs after five minutes of squinting at your screen: ten out of ten. There, I did it. Once in a blue moon? I’ve never seen a blue moon.

Back in 2004 Efterklang’s debut long-player, Tripper, passed largely unnoticed by the music press at large. A search on Metacritic yields no results, indicative of the level of attention it received. An EP of earlier this year, Under Giant Trees, hinted at where the Danish quintet (a sextet including film-maker Karim Ghahwagi) were now headed: luscious electronic arrangements were expectedly in place, but there was something fuller about the five songs that marked Under Giant Trees out as a short-play record to truly savour. They swelled where once they laid flat, grew from basic templates while in the past they’d guiltily stood their ground. A tingle ran from the base of the spine to each fingertip first and last time though, and it has remained there ever since, a buzzing expectation burning the senses.

Parades is the culmination of all the potential Efterklang have ever exhibited; a sumptuous, symphonic masterpiece of crackled circuitry and classical compositional skill, drenched in harmonies that spill from instruments too varied to list yet that combine quite brilliantly to craft pieces that know no creative boundaries. This is music full of spirit, of invention; it’s music that rises and rises, lifting the listener as it reaches the sort of height once the reserve of Radiohead, Sigur Rós and Arcade Fire – you know, the bands that touch you right there, without fail. Parades exhibits from the outset one objective fact of this highly subjective appraisal: that Efterklang have the material to rank alongside said potential peers, to be as revered even if their commercial appeal is less obvious. After all, Parades lacks an immediacy evident in the recent work of many an avant-pop post-rock epic-indie band.

This album opens with a whisper, a moan, a slip of a suggestion of a semblance of something mighty; ‘Polygyne’ rumbles into life, the first cracking of an eyelid clamped for a gestation period well beyond our human convention. A voice, disjointed, floats atop delicately plucked strings; elements are introduced slowly, peaking at the two-thirty mark when what feels by now like an Elliot Goldenthal arrangement is hijacked by a horn-toting marching band. When the violins swoop a minute later, all bets are off: progression is certain, but directions were mislaid long ago. ‘Polygyne’ is a grandiose opener, a worth-the-money-alone track to cherish, but those seeking instant hooks are bound to be left puzzled by its placing, especially as more immediately gratifying selections can be found elsewhere on Parades.

A slide-on-the-ice shuffle later and ‘Mirador’ opens Efterklang’s sonic palette up nicely: here, horns and drums square off, fireworks brightening an air of celebration; reds and blues, sparks and showers of glittering embers falling to an earth somehow softer underfoot than it was ten minutes ago. It’s a music box – a child’s toy – made bigger, better, louder by adults full of vigour and fervour. ‘Horseback Tenors’, as heard on the album’s online teaser, is probably the most over-the-top piece of string-laden wonderment Efterklang have ever penned, but its presence amongst such similarly extravagant arrangements doesn’t leave it feeling unnecessarily embellished; it sits comfortably, its fade-out calm a lead-in for the highly minimalist ‘Mimeo’. The segueing makes for a masterful contrast, heightening the listener’s level of attention just as it was about to be crushed by a beauty too cacophonous to fully comprehend.

A wheeze, a sniffle: ‘Blowing Lungs Like Bubble’ is a funeral procession in a Tim Burton realm, a fantasy drone designed to tug at the heartstrings and poke at the tear ducts. Vocals – as is the case throughout – are rarely discernable in the fug that the myriad facets of the Efterklang sound kicks up, but they form an instrument wholly unique to the Danes. ‘Caravan’ is blustering drama wrapped up in sepia shades and rose tints; as it falls away only to return with rushing bombast, the listener is swept up as if in the palm of a giant – cradled but travelling at speed, destination, as always, unclear.

Considering what’s come before it – alternative music in its many guises, each as beguiling as the next – the album’s climax is a strangely muted affair. ‘Cutting Ice To Snow’ runs along a traditionally strummed guitar line, feeling jaunty like little else in the Efterklang canon. It bounces, Broken Social Scene-like, all summertime smiles and happy hand claps and high-fives, ‘til collapsing in a heap of heaving laughter, abrupt and conclusive. No prolonged fade-to-black, no bonus epilogue: Parades ends in a manner wholly different to how it begins, with haste and true finality. It’s a bold move, something that no listed reference point of this piece would likely dare execute.

The five members proper of Efterklang no doubt have their sights set on horizons beyond this, but from a personal perspective, on the outside and looking in at what can only barely be condensed into words few enough to constitute a critical review, it’s tough – really tough – to imagine where these Danish magicians can progress to next. This is their Dark Side Of The Moon, their OK Computer; it’s the album Björk wishes she’d conjured in her mind when realising Vespertine, full of mystery and long-term intrigue. Never once forsaking tenderness for tumultuous forays into soundtrack-like territories, as could well happen to material such as this in the hands of lesser acts, Efterklang have produced an affecting album that warrants a place in the homes and hearts of every reader. Seriously: this is one of 2007’s finest LPs, no question.

Give it an inch and it’ll steal your affections like few albums before; ignore its charms and there’s no love lost, so no bother. But please, I do implore you: make Parades your next full-length purchase and you’ll be singing its praises, like I’ve just attempted, for the foreseeable future. It is a far from ephemeral thrill, set to stand like the tallest oak.

Hunch Your Body, Love Somebody