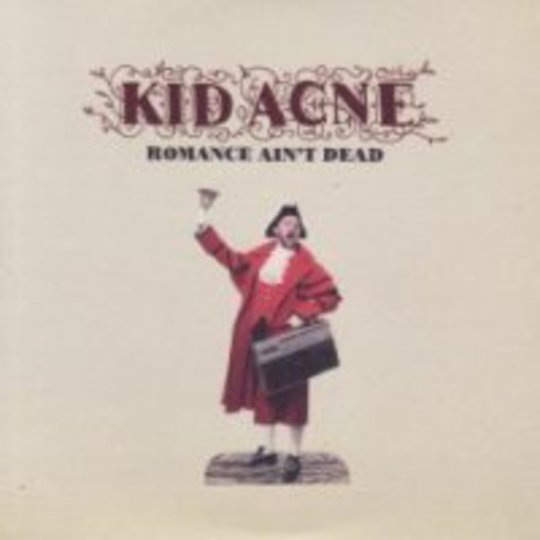 With popular music in Britain becoming increasingly dominated by accents far from accepted BBC pronunciations of not so long ago – ‘RP’, isn’t it? – Kid Acne’s breaking out from the country’s hip-hop underground couldn’t have been better timed. From Sheffield and absolutely disinterested in masking any vernacular variations on capital city swing, the rapper bleats his way through a series of retro beat-strewn tracks with an incessant ADHD fever. Problem is, delivery stripped from the equation, what he’s got to say isn’t wholly exciting.

An as-it-is approach to lyricism well thumbed is our Kid’s angle here, and it’s one already bettered in 2007 by, perhaps unexpectedly, London’s Lady Sovereign. Both Sov’s Public Warning and Romance Ain’t Dead fight out of similarly ghettoised corners, but while the former’s bile is laced with intelligent humour and a cutting wit, Acne’s goofing is base-level a la a certain Welsh pop-hop collective. It’s amusing in limited doses, for sure, but over an album’s length his subject matters gel and mash; it’s a homogenised mess of reality bites, set to 8-bit backdrops last heard in a Year 9 music class. Demo function: bingo.

Of course, deviations produce highlights: single ‘Worst Luck’, assessed separately here, is a word-association gem that’s hooked to a great “I’ve got two phones, like a drug dealer” refrain. ‘South Yorks’ is a stripped-simple aggro-rap full of comedy braggadocio – and here the comedy aspect of Acne’s material shines – and ‘Roc Roc Radio’ is a boom-bippidy-bomp stomp reminiscent compositionally of the Beasties circa Paul’s Boutique, featuring the awesomely nonsensical line, “Like Gary Wilmott, I don’t give a fuck a lot”. When Acne misfires, though, his stream of consciousness gets blocked like a boot on a hosepipe; erratic narratives play out like a particularly bad Family Guy, when this thing reminds our protagonist of that thing. Flashback, wut.

And the nasal female vocals of ‘Fcuk All Lately’? Oh dear no _no_.

No tragedy though Romance Ain’t Dead clearly is given attention enough, it’s far from the breakthrough that label and artist might have hoped for. No doubt Acne’s got lyrical skills to be proud of, and when he strikes illustrative gold on this LP his potential is clear. But too much of this album is bogged down in stagnant waters, progression a forgotten goal to strive for, and on the ha-ha front, Pitman does it better. Stoned, this’ll sound great; sober, the simplest analysis reveals holes plentiful.