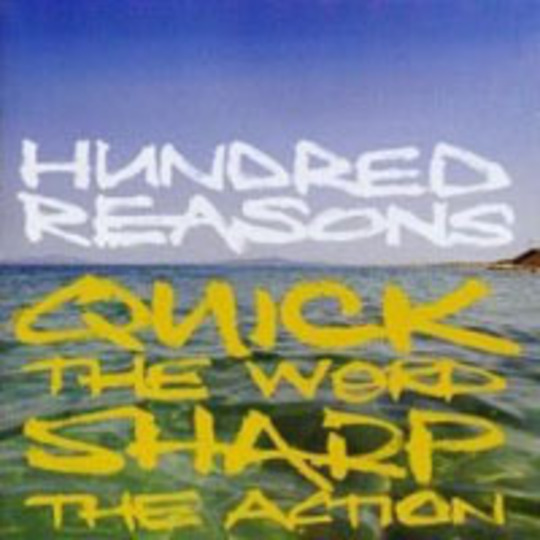 It’s hard to remember those days when Hundred Reasons first arrived on the scene, sounding so fresh and exhilarating. Listening to their subsequent releases, the memory of what once was begins to blur and become little more than a myth. You can actively deceive yourself that what happened back there was your fault - that naivety got the better of you, and you embraced Hundred Reasons far too readily.

Yet you can’t have been alone. Only a powerful, popular start allows a band to drift on for so long in this manner, on towards the middle of the road. Quick The Word, Sharp The Action probably won’t restore your faith in Hundred Reasons. It won’t get your heart beating faster. It is, at best, a decent pop record with a smattering of riffery that connects this band to their past.

Shun that desire for rocking out and there are plenty of tunes to sing along with. ‘No Way Back’, ‘Sick Little Masquerade’, ‘Boy’ and ‘Out Of Time’ are simple ditties beefed up with the traditional crescendos. They won’t blow you away, but they could each be successful radio hits. And as much as you want to fight back against this tide, you’re powerless to prevent Hundred Reasons getting older and tamer. Accept them on these terms, and Quick The Word, Sharp The Action will win over the part of your soul that enjoys a bit of cheesiness.

As an artistic prospect, though, Hundred Reasons are wearying and worn out; a band that can’t make up their minds. They imprison themselves in formulaic structures and then fight to break out of them - this is a band that desperately, desperately wants to tread new ground, yet because of their own limitations, and especially their kowtowing to melody, the task is beyond them. Instead, this is a collection of songs that sounds bitterly frustrated, especially when instrumental ‘Pernavas Iela’ and the baffling metal of ‘The Shredder’ break the pop flow.

What do they want to be? Pop? Metal? Post-hardcore? By failing to make up their minds, Quick The Word… becomes a rather confused album - one that has its moments but won’t reinvigorate the band’s career.